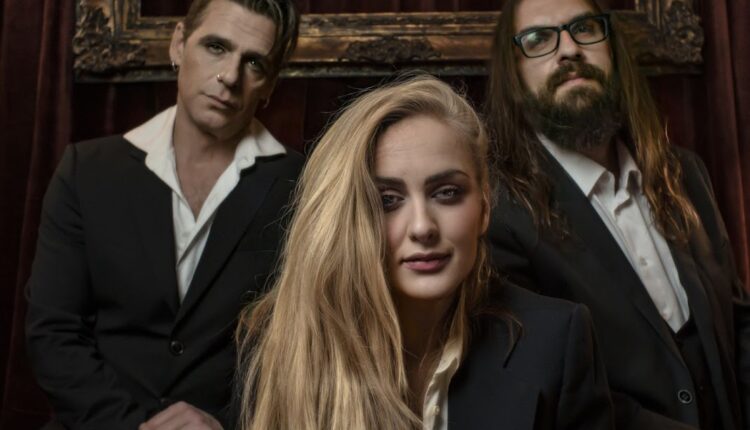 Greek Avant-Pop artist Lia Hide returns with her new single ‘Dinner’ taken from the upcoming, fourth studio album ‘The Missing Fourth Guest’. Having previously signed to EMI-Universal and worked with a number of acclaimed producers including multiple Grammy award winner Adam Ayan, the Athens based artist has established herself as one of the most exciting names on the Greek Art-Pop scene. Now back with a three piece band  and new material released via Conch Town Records, Lia is once again demonstrating her prowess as a songwriter, vocalist and musician.

The follow up to the previous single ‘Proposal’, ‘Dinner’ continues where Lia left off, giving another exciting insight into the upcoming album. Thick with layers of reverby electronic drums, detuned guitar, biting synths and rich piano, Lia creates a warming, experimental soundscape under her stunning, entrancing vocals. As the track progresses introducing a driving live drum beat, ‘Dinner’ bursts into a euphoric brass section elevating the soundscape and demonstrating Lia’s versatility and ability to flawlessly blend elements of Alternative-Electronic, Pop and Jazz. Experimental, beautiful and packed with musical complexity, Lia’s sound is often compared to the likes of Potishead and early FKA Twigs.

Speaking about the new single and the upcoming new album Lia said:

“The new album borrows its title from Plato’s ‘Timeaus’ dialogue opening line, and

discusses the emotional struggles of the recent Covid19 pandemic and lockdowns,

human mortality, and the modern man’s place in the Universe.

‘Dinner’ started as a musical joke with us three playing around, placing one loop on top of another, un-synchronizing them on purpose, then adding the most peculiar and unmatching elements : a sad jazzy trumpet solo, Chet Baker style, an almost naive, silly, soulful, vocal hook, crazy Bowie-Deranged-style pianos, all of them fighting for their place over a hip-hop heavily syncopated drum beat, with glitch and cinematic elements to spice things up. There was much struggle in finalizing the song, which we decided to show in the video, as we disagree and fight with one another, after eating our platonic dinner.

‘Dinner’ was the very first song I wrote for the new album and made me focus my head on completing a fourth album.”

Lia has studied classical piano, operatic singing, music technology, advanced harmony and songwriting giving her a vast knowledge of music theory which informs her immense creativity and innovative ideas. Having played a number of European tours including the most recent tour in 2019, a 40 day venture with 28 shows across 10 countries, Lia has appeared in a whole host of tastemaker press including CLOUT, Purple Melon, Readers Digest and Rockway.gr as well as playing support for and collaborated with a number of top international and Greek artists including: Tricky, Joseph van Wissem, Anneke van Giersbergen, Kadebostany, KBHTA, Keep Shelly in Athens, Molly Nilsson and Kovacs.

The upcoming new 8 track album ‘The Missing Fourth Guest’ was produced by Lia Hide, mixed by Ian Shaw at Warmfuzz Productions, and mastered by Denis Blackham at Skye Mastering, UK.