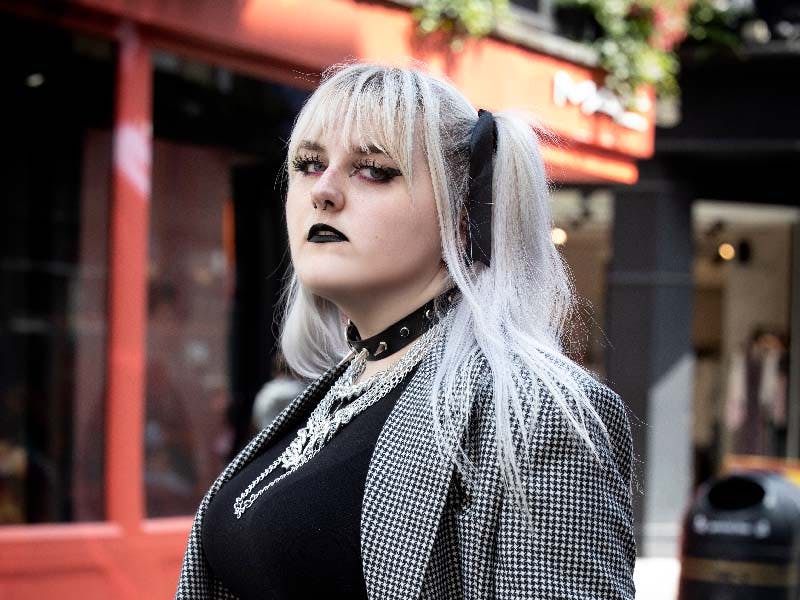 Reflecting Madi Mai’s natural affinity for storytelling, ‘Anti-Clockwise’ represents how it feels to have your life spiral out of control. A natural-born songwriter, she has been accredited with writing songs as young as 10, later developing into a multi-talented musician through self-taught guitar, keys and ukulele, as well as a poet and lyricist.

We caught up with Madi Mai to find out more. Check out the inter below and be sure to stream “Anti-Clockwise” beneath”

STREAM “ANTI-CLOCKWISE ” BY MADI MAI BELOW

So, what’s up Madi Mai tell us a bit about yourself and your musical journey?

I’m Madi Mai and I’m an 18 year old singer/songwriter from Dagenham. Music has always come naturally to me; I was raised in a musical household – both of my parents sing and would gig in local pubs when I was young. I think seeing them perform so much inspired me to take a similar path. I didn’t have any formal music training so started to teach myself to write songs and play some instruments such as guitar, ukulele and keyboard.

Tell us a bit about what it was like growing up as a musician in Dagenham?

Growing up in Dagenham is great in its own ways, because it’s so close to London and so culturally rich. As a kid I was always surrounded by different types of music – buskers, street performers, and music from every kind of genre.  I think that this really shaped my sound – I’m not bound to a specific genre! I always write songs about my life and real world issues.

When the knife crime rates began to rise in Dagenham, it was a worrying time for us all. The death of Jodie Chesney as a result of knife crime was a tragic loss in our community. This attack spurred me on to write a song called Change, and I wrote it in tribute to Jodie. I believe that there is good and bad everywhere, and all kinds of musical influences come from Dagenham.

Tell us about your musical influences both old and new?

The artists I’m influenced by vary a lot! Growing up, I adored the heavier sound of Iron Maiden. This was my introduction to rock music, and I fell in love with the carefree punk values a lot of these musicians hold. I was also heavily inspired by Melanie Martinez growing up – not only by her meaningful songwriting, but her fashion sense which is inspired by elements of pastel goth. These artists truly shaped who I am today.

Tell us about your development as a musician and your connection with Instinctive Behaviour?

Being able to work with Major and Instinctive Behaviour definitely enhanced my musical skills. It’s been such a great opportunity. I have the freedom to express myself through music and I have an amazing producer who will help me bring these ideas to life. We have a great working relationship and working in the studio hardly feels like a chore because we’re having so much fun.

Explain the concept behind the single: how did it come about?

I wanted to write a song about typical teenage life – spending time with your friends, hanging out on the streets, losing control. Things don’t always go your way and sometimes they get a little bit messy. That’s how Anti-Clockwise came about!

How do you feel this song differs from your old material?

I’ve been writing songs ever since I was 10 years old, and Anti-Clockwise is my first release with Instinctive Behaviour. To me, it’s in a whole new league compared to my previous song. I’ve had such a cool group of people supporting me and I think that’s what has made it so different to anything else I’ve created.

What do you get up to in your spare time?

I’m currently studying for my A-Levels, so a lot of the time I can be found studying in the school library. Other times, I’m spending time with friends, going to gigs and concerts, going to the gym or exploring around London.

Which artists would be your dream collaborators?

I would’ve loved to collaborate with David Bowie. In terms of current artists, I think Ashnikko would be an incredible collab.

What does the new year hold for you?

I’m currently working towards releasing my first ever album! It’s such an exciting process. Hopefully I’ll be out gigging and performing much more in the new year.

Wow! Cardi B Gives Offset 2 Million Dollars For His Birthday