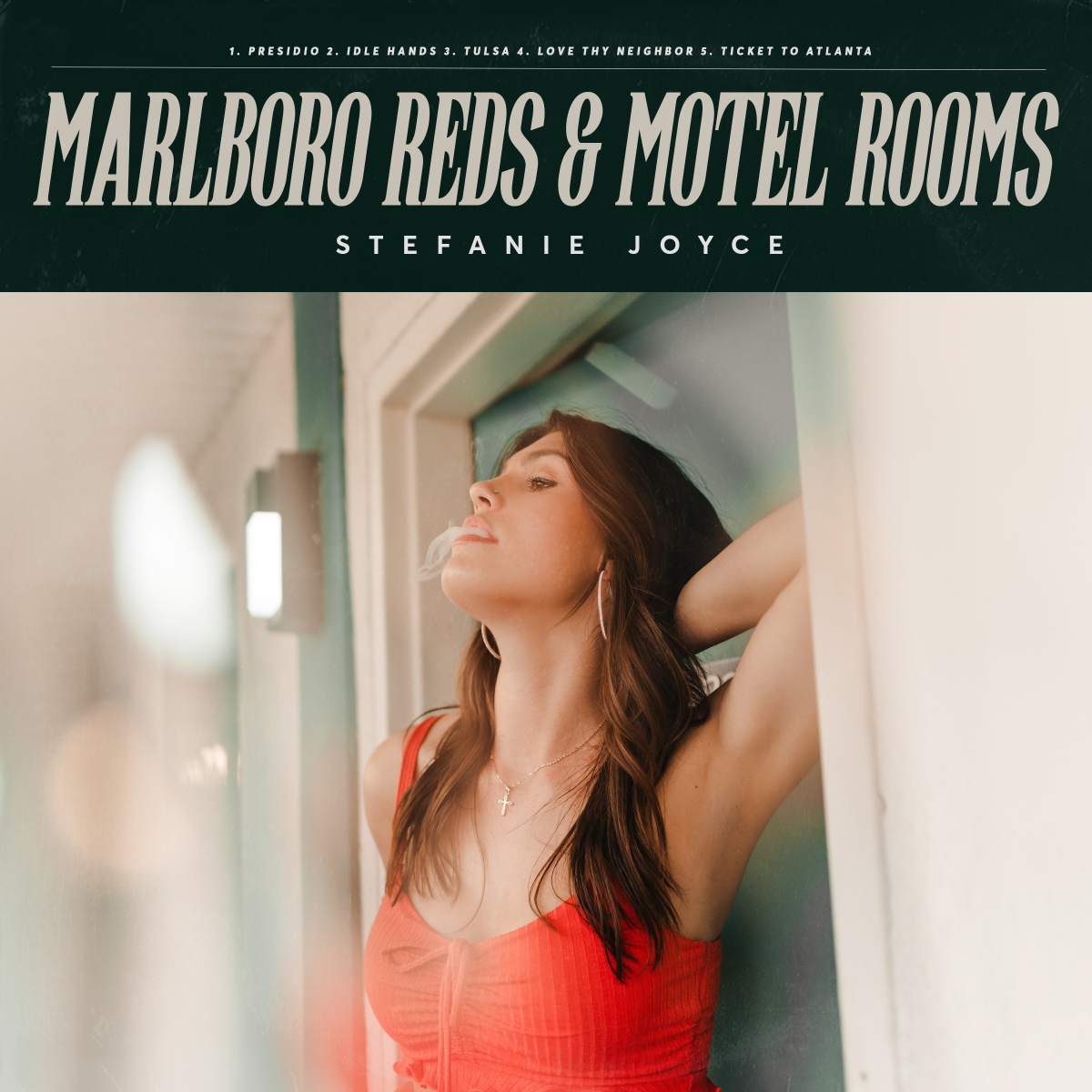 Marlboro Reds & Motel Rooms crafts an engaging and clever narrative about what it means to love, lose, and move on, as well as the fallibility of humans. It’s wise and a testament to her love of storytelling and the southern tradition.

The first track, “Presidio,” is a meditative and soothing stage-setter for the rest of the EP. Joyce sings of longing to go back to Presidio and the long-gone time where she was still in the relationship she’s singing about. It’s moving and vulnerable, and definitely relatable for anyone who knows what it’s like to let fear take over, barring you from taking that next step in a relationship.

The third track, “Tulsa,” brings another location into the mix as Joyce sings about endings: that last cigarette, that last drink, that last love. The EP’s title is derived from the opening lines of this track: “I used to like Oklahoma/Marlboro Reds and motel rooms/I used to like bourbon in my cherry cola/I liked a lot of things when I loved you.” Joyce sings of a hard truth in this song, that you “can’t have something just because you want it.” It’s about letting go, recognizing the importance of the past and moving on, and that message is powerful.

The EP’s penultimate track, “Love Thy Neighbor,” puts a clever spin on the Christian phrase by making it about having an affair with the narrator’s neighbor. As Joyce says, “It’s so hard to give up something that’s so easy to get.” Everyone’s got a secret, it’s just a matter of it coming out or not. Joyce spins a cheeky narrative around this concept, with the narrator claiming she tries “to be a damn good wife,” so why does it matter if she cheats on her husband? It’s an interesting take on the double standard people take with women who are unfaithful, especially since it spins a religious phrase.

The final track of this EP, “Ticket to Atlanta,” is a wistful bookend to the whole project, with soft vocals and a gentle instrumental. It’s about leaving your mistakes behind, quietly and without a trace, refusing to confront them and instead moving on. Except, not really. Sometimes we can’t help but give in to the impulse to run away, and feel as though we’re finally going to go through with it. But we don’t; we stay, and we “tear up that ticket,” as Joyce puts it, and we go back. Some decisions are too hard to make, and running away isn’t always where the heart’s at.

Steeped in the tradition of country and folk music, with a distinctly contemporary, cinematic edge, Stefanie Joyce’s songs tell stories in images as much as sounds, weaving tightly crafted tales of sin, redemption, and everything in between.

Stefanie grew up in the Pacific Northwest and has loved storytelling for as long as she can remember. As a teenager, she told those stories through dance, training with Canada’s prestigious Alberta Ballet. As a young adult, she told those stories through film and literature, earning a degree in Film Production & Creative Writing at The University of British Columbia. She also spent an undergraduate semester cutting her teeth on short stories at the Iowa Writers Workshop. It wasn’t until she finished college that her love of southern literature led her to Tennessee and she began writing songs. So, while she counts singer-songwriters such as Gillian Welch, John Prine, Brandy Clark and Evan Felker (Turnpike Troubadours) as major musical influences, her first love will always be authors; Flannery O’Connor, Cormac McCarthy, Annie Proulx.

Since moving to Nashville in 2017, Stefanie has garnered several cuts as a songwriter with  artists such as Mary-Heather Hickman, Gabe Lee, Zoe Cummins, and Ryan Lindsay. She has become a regular feature at Nashville’s premiere writer rounds, and has had the opportunity to play at major country music festivals such as the Lynchburg Music Festival. In 2020, her songs caught the attention of renowned publisher Woody Bomar (formerly of Sony/ATV) at Green Hills Music. Since then, she has been working with Bomar to further develop and market her song catalog.

In 2021, her Billboard-charting single “Treasure” (cowritten and performed by Mary-Heather Hickman) debuted on country radio and was featured on The Bobby Bones Show and iHeart Radio’s Next Women of Country.