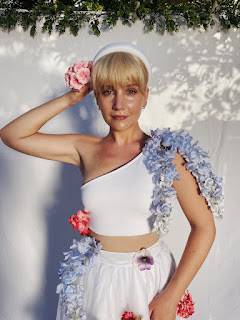 Since the pandemic began, Anja Kotar has taken the inspirational approach of making the most of the simple, everyday things that surround us and take for granted. Channeling this energy, she then started to create a signature dose of sunshine-y pop that is relatable to all and speaks volumes. This has led to a selection of songs that have marked the culmination of the past 12-18 months for Anja, with her debut EP ‘Songs From Isolation’ finally being released to the world.

With singles released so far including ‘Tuscany’, ‘Alone Together’, and ‘Love Song’ being featured in the likes of Wonderland, Notion and The Line Of Best Fit, it’s clear that what may seem like Anja Kotar’s simplistic approach to songwriting, is actually an influential notion that will carry on for years to come. As well as further success and editorial support across both Spotify and Apple Music, Anja’s effortless qualities to romanticise and soften the blow on what was a global pandemic has hit home for many, not just the few.

The final and lead single taken from ‘Songs From Isolation’, is the celebratory French chanson-inspired ‘Midnight in Paris’. On the closing track of the EP, Anja brings everything to the table with her swooning and swirling voice that takes the stage, coupled with the brilliantly composed production implementing some real moments of subtle magic throughout. Alongside the pure joyful and fresh melancholic pop sound, ‘Midnight in Paris’ is certainly the statement track on the record, with an undeniable flair and personality shining through from Anja.

“Who Wants To Be A Millionaire?” The No. 1 TV Game Show Is Back, Bigger And Better!