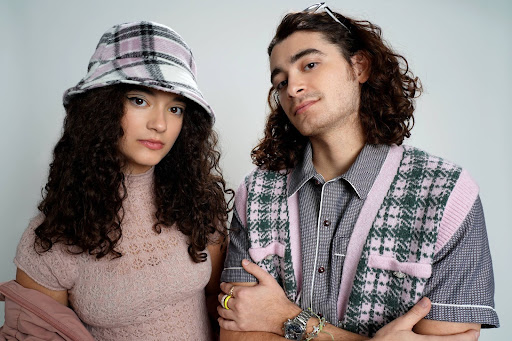 Muo Duo is the alias of songwriter, producer, poet and vocalist Miles From Space and sister Winter. Off the back of ten EPs and singles, the pair have racked up over 200,000 streams across Spotify since making their debut in 2020. ‘Music Machine’ sees the fast-rising talents breathe life into their new release while joining forces with rap sensation Mick Jenkins this March.

‘Music Machine’ opens with a luscious blend of jazz influenced melodies, colourful bass notes and pulsating patterns which float out in the distance. Jenkin’s flawless lyrics appear right from the off before a shift occurs as Muo Duo lead with their inspiring vocals which brings out the spontaneous best in each of them. This track is raw, direct and sincere but it’s the duo’s collective purpose that stands out the most. The serene musical experience is powered by the supreme mastering of three times Grammy-winning engineer Will Borza.

“Music Machine is about the fact that you have to believe in yourself before anyone else will believe in you. It’s about challenging yourself and pursuing your talents, and never giving up on a dream. The whole track was produced by Muo Duo. Vocals and brass were played and performed in a studio by Miles and Winter. Featuring legendary Chicago rapper Mick Jenkins and mastered by Grammy-winning engineer Will Borza.” – Muo Duo

Miles From Space trained in composition and French Horn at the Juilliard Pre-College where he studied classical music whilst being heavily influenced by the songwriting and groups including The Beatles, Tyler The Creator and Kanye West. His sister Winter is an accomplished and incredibly talented vocalist that performed on Broadway playing young Elsa in Disney’s production of Frozen and currently sings in the children’s chorus at the Met Opera. The pair have unique vocal blends which are weaved through their tracks that transcend genre and reveal captivating, relatable and vibrant stories with addictive hooks and melodies.