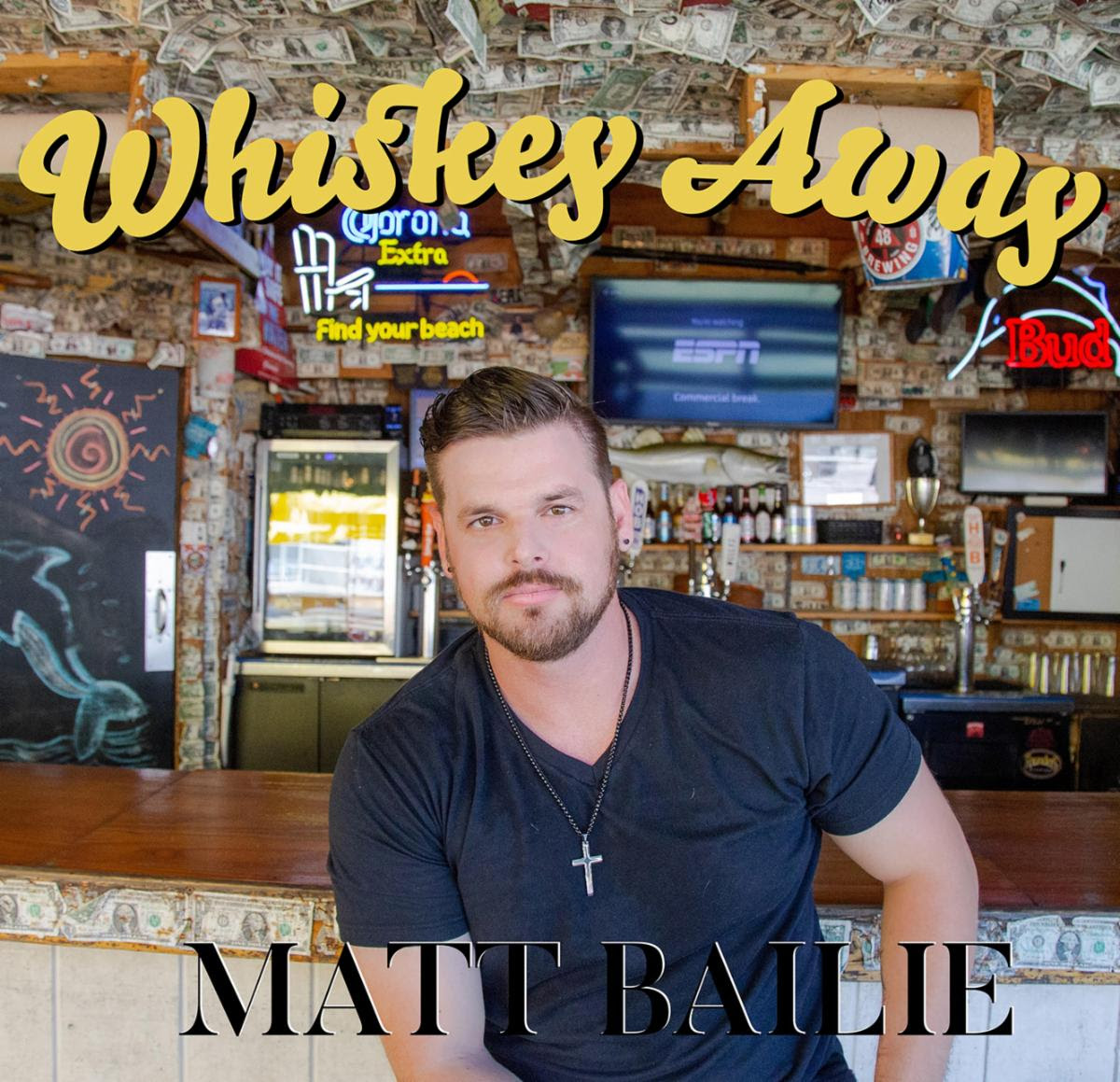 Matt Bailie Releases New Single, “Whiskey Away” – Independent artist Matt Bailie is excited to release his latest single and music video, “Whiskey Away.” The visually engaging music video, directed by Johnny Dwinell and filmed on location at Alley Taps in historic Printer’s Alley in Nashville, was broadcast premiered on The Country Network this week and digitally premiered by Nashville Noise.  “Whiskey Away,” written by Barrett Baber, Michael Wilkes, and Colin Healy, presents a twist on the usual “guy meets girl in a bar” theme and shows a more vulnerable side of the man in the story.

The track, produced by Michael Wilkes, opens with a driving groove before it eases back just enough for Bailie to set the stage of being at a bar and opening a tab just in time to see a blonde beauty entering with a group of her friends. As he talks it over in his mind, he’s intimidated by the thought of approaching her and asking what her name is and if she’d like to dance. That inner conflict soon explodes as Bailie unleashes his edgy and powerful vocals in the chorus where he determines his best course of action is to take on more “liquid courage” before taking that next big step.

“I wanted to bring something unexpected with this song and video. An opportunity to show a more reserved and respectful way for the guy to act in the situation. I never quite got the courage to approach the girl,” Bailie says. “So, she approached me instead. It’s definitely a twist on what you’d expect to happen.” “Whiskey Away” is the debut song from Bailie’s forthcoming EP, ‘Naked,’ slated for release later this year. It marks the return to the country music scene for the Florida born talent. Bailie first came to Nashville in 2007 and released his debut album in 2010. Drawing on early influences of Southern Rock royalty and family friends Johnny Van Zant of Lynyrd Skynyrd and Donnie Van Zant of 38 Special, who also guided his early career, Bailie’s star was on the rise with well-received singles and music videos.

But just as his career was gathering steam, the record label where he was signed folded. Dejected and disillusioned, he made the move back to Florida where he focused on his personal life and well-being. He started two home remodeling companies and became a certified personal trainer. He didn’t sing or pick up a guitar for about five years until he met the love of his life, Taylor, and joined an amazing church where he once again found his voice playing and singing for their worship band. The couple married and had a son in 2020.

When Bailie finally picked up a guitar and began writing and singing again, a brand-new authentic voice came out. “I don’t know where it came from,” he says. “This is the most real I’ve ever been in my music. I can only thank God.” Excited by the renewed creative spark, Bailie and his recently wedded bride made the move back to Nashville where he began tackling his career again in earnest. He signed a publishing deal and began recording the next phase of his musical journey. Back with a brand-new life, a brand-new look and a brand-new sound, Matt Bailie is once again knocking on the door to his destiny. He states, “This is going to be the most exciting chapter yet!”