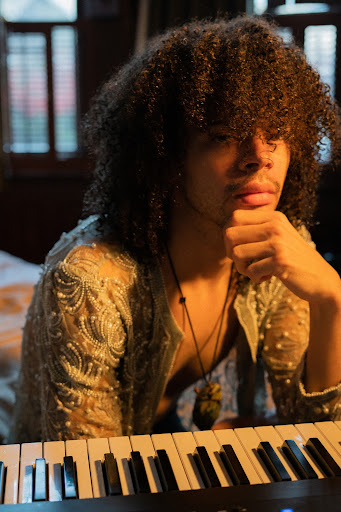 Kris Kollins is a genre bending blend of alt r&b, pop, funk, psychedelic, and touches of progressive soul. Highlighting his alternative r&b side in his upcoming releases, Kris is very excited to let his work speak for itself. Now Kris unveils his delectable new offering ‘River’, a retro-infused R&B track that oozes a charmingly seductive vibe.

Kris thinks of ‘River’ as a sensual way of asking someone to have a one night stand with you. Extreme curiosity for someone that you admire and that you want to know more about in an intimate way. While sexual on the surface, it explores more than just physical desire, with the lyrics highlighting the attraction to the mind and dives into wanting to bathe inside those deep parts that we only share with certain people.

Lyrically the song pulls from Kris’ personal experience during a time in his life where he was exploring all aspects of human sexuality. Sonically, the song sounded completely different, starting as an 80’s powerhouse love ballad, but as time went on Kris wanted something more soulful that sounded more mature and sexy. Pulling from the days of Quincy Jones when he was working with Michael Jackson, and when Janet was with Jimmy Jam and Terry Lewis.

Kris’ musical journey so far has known no bounds, from reaching the Top 30 Club Dance Charts in 2018 with ‘Hydro Llove’ to being signed with Global Publishing in the UK. Kris has worked alongside big names such as H.E.R, Joelle James (song writer of Boo’d Up), Loren Allred, and producer Ryan M. Tedder. He’s been on tour with Marsha Ambrosias and has opened for the likes of Dwele. We’re eagerly awaiting Kris Kollins’ next move as he grows even stronger.