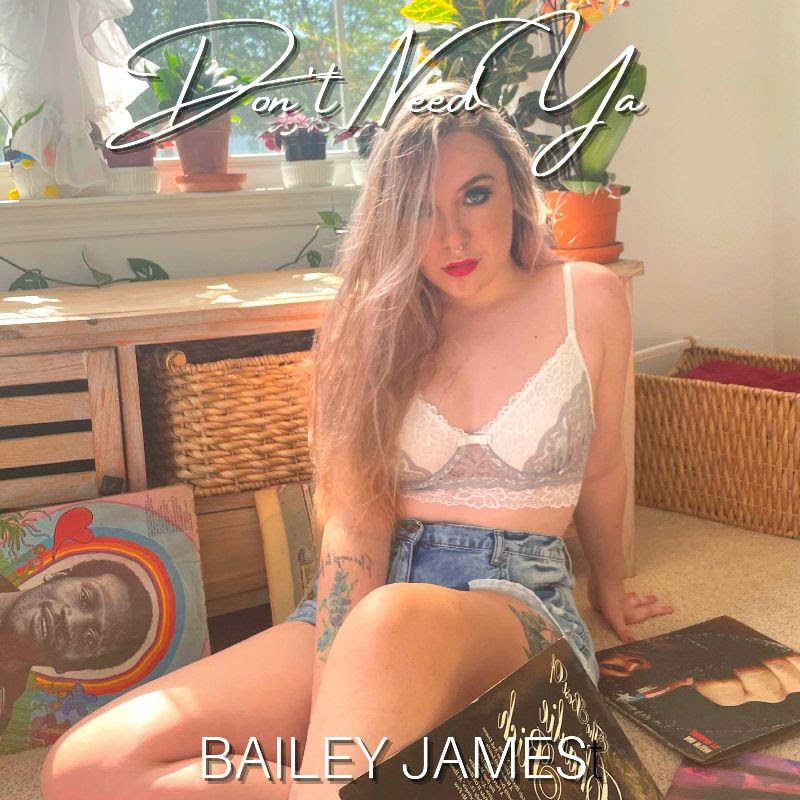 Nashville’s rising country-rock songstress, Bailey James, releases new song produced and written by Nolan Neal Seals of The Voice and America’s Got Talent, who recently passed away. Bailey had her second Whiskey Jam performance earlier this month and dedicated her whole set to honoring the relationship she had with Nolan as a songwriting partner, producer, and friend.

Bailey James’ hidden power lies in the quiet moments found in her latest release “Don’t Need Ya.” Written with a fresh start in mind and accompanied by seamless acoustic guitar, the song can be received as an indie country tune as easily as an alt-pop track. James’ crystal-clear vocals are effortless, sexy, and raw while retaining a unique tone.

In addition, the chorus where Bailey sends a message about empowerment (“Cuz, I put a record on/dropped the needle/on a goodbye song/I don’t need ya”) is perfectly matched with a more upbeat melody, which helps convey the idea of not depending on someone else and being happy.

“When I went to write this song with Nolan Neal I had barely turned 16. I walked in wearing a Pink Floyd shirt ranting about high school, how my friends were getting high 24/7, a breakup I can’t remember now, and he listened. We wrote this song about the way people cope with their heartbreak or the vices they use. The version you will hear is also the demo Nolan produced because it is just so perfect. He spent hours that night making this demo, and I couldn’t understand why at the time, but I do now. It is so you could hear this song the way he intended for it to be heard.” – Bailey James

Bailey James is lighting up Music City with her sophisticated soulful country music. It is hard to fathom that at 19 years of age, Bailey James can bring a crowd to their knees.  Much like Janis Joplin, she can hypnotize you with her incredible vocal styling and bluesy riffs.  Her swiftly growing audience celebrates her fresh musical adaptation that is well beyond her years. including country roots infused with blues, rock-n-roll, and soul.

One of the hardest working young ladies in the music industry with 19 singles and an EP during her six-year tenor in Nashville. all released since turning 12 years old. She has laid it down at the legendary Bluebird Cafe, Douglas Corner, The Listening Room, and Wildhorse Saloon and has been featured at WSM, home of the Grand Ole Opry Radio Station.

A multi-genre vocalist, guitarist and songwriter with over 250,000 fans and verified across her social media platforms, Bailey released her single “Finally Free” July of 2021. It was named Opry Circle Song of the week, and charted #42 on Billboard Indicator. She is also a Golden Ticket alum of American Idol 2019.

In addition, this rising country songstress and social media sensation was appointed as the first National Youth Advocate for The Jason Foundation. She is dedicated to raising awareness for suicide prevention through education and empowerment on behalf of this important non-profit organization both in her live shows and across her social media. This honor places Bailey alongside longtime Jason Foundation musical ambassadors, Rascal Flatts and the late Charlie Daniels. She is also an ambassador for The Sound Mind Network, which is a non-profit organization that inspires those struggling with addiction, mental health, and trauma to use their personal passions as a creative-based recovery alternative.

Bailey James performed her second Whiskey Jam performance earlier this month and dedicated her whole set to honor the relationship she had with her long-time co-writer and producer, Nolan Neal Seals of The Voice and America’s Got Talent, who recently passed away.