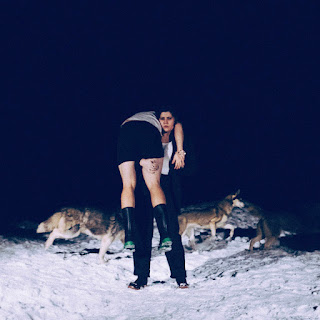 Teagan Johnston – Blue Monday: Formerly known as Little Coyote, Teagan Johnston, is a singer-songwriter who drives the genre beyond its current borders, bringing a radical rawness to her work that hits you in your heart.  Born in the Yukon, raised between South Africa, Spain, Switzerland and the West Coast of Canada, Teagan brings a vast and ever layered perspective to her work. With plans to release her debut album this year, Teagan now presents her first single from the full-length work, ‘Blue Monday’. The dark-pop offering is an introspective and emotional piano-ballad, driven by a delicately wistful vocal line and haunting instrumentation.

“Blue Monday details the events leading up to a breakup. It is a deeply personal song that explores drug addiction, the loss of a partner and the feeling of begging someone to stay at the cost of yourself.” Teagan shares the meaning behind the track.

“The lyric “Cut into me like a Blue Monday midnight driver” refers to a carjacking that happened near my apartment while I was going through this breakup. The story of the car jacking as it was told to me was that on Blue Monday a car jacker stabbed someone and took their vehicle. After hearing the story I imagined the victim of the carjacking victim sympathizing with the carjackers’ need to “just get away” as I was with my partners’ need to leave our relationship.” Teagan adds

Compared to the likes of Fiona Apple, Regina Spektor, and Nick Cave, Tegan’s debut ‘The Trouble with Teeth’ was released in October 2017 with the enthusiastic support of EggHunt Records. Her following 2019 EP, Stay Gold, received many accolades and acclaims from various media outlets, such as Noisey and PopMatters. A seasoned and experienced live performer, at home playing solo or backed by a band, Teagan has toured North America and Europe, including performing a special set at David Lynch’s prestigious private Paris nightclub Silencio.