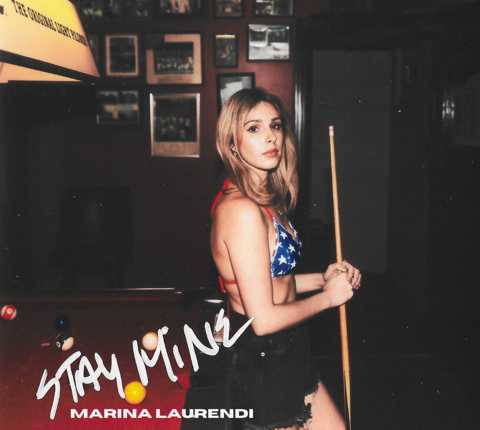 Following the success of her “Stay Mine” EP and title track, rising indie singer-songwriter Marina Laurendi wraps up with a powerful music video. The video for “Stay Mine”, directed by Luke Haag, shows an intimate portrait of the highs and lows of a relationship.

The song relishes in the perfect imperfections as Marina croons the opening lyrics, “you’re my favorite headache”. The video matches the song’s mood from start to finish; as the song swells and builds, the passion between the couple is met with growing tension and a darker side of the love is revealed.

The video (which showcases scenes of train tracks, a dive bar, and a campfire among others) was shot at multiple locations around Buffalo and the Niagara Falls area and provides a 360 look at the connection between two restless lovers with a case of wanderlust. Marina looks stunning throughout, giving us old-Hollywood glamor with her Lana Del Rey and Phoebe Bridgers-inspired sound.

On the meaning behind the song and video, Marina says: “Stay Mine is really about wanting to create a beautiful life full of wild experiences and the desire to share all of that with someone who matches your fire. I had this sense of restlessness when I was writing it like I was just dying to start filling my life with these crazy adventures that make you feel like you can be forever young and I think that translated into the song.

When we’re performing it, I always visualize it like a scrapbook of amazing memories so with the video, Luke Haag, our director/videographer, really helped me hone in on the best way to convey that. The whole thing is snapshots of this relationship where we really see the good, bad, and the ugly. It’s a healthy mix of reality and this pipe dream of what could be.” Since its release in August, “Stay Mine” has garnered over 10,000 streams on Spotify, and songs from her EP have been described by press as “stunning” and “breathtaking”.

Marina Laurendi is a singer/songwriter and musician, originally from the Western New York area. Fusing alternative rock, indie pop, and cinematic textures, her music calls forth a sense of wanderlust, nostalgia, and idealistic Americana. Poetic verses draped over edgier alt rock textures; catchy pop hooks; haunting vocals and moody melodies that stick in your head, her voice as a songwriter is uniquely personal and widely relatable.

Marina started performing at a young age as an actress, singer, and dancer. Her  career in musical theater led her to NYC, where she performed around the East Coast and Off-Broadway. Her music is heavily influenced by the pulse of New York City along with the quiet nostalgia of her home in Buffalo. Marina’s music captures elements from singer/songwriters of the 1960’s as well as modern indie artists like Lana Del Rey, Sharon Van Etten, and Lorde.

Marina recently performed at notable venues like The Bitter End in NYC, Hard Rock Cafe in Niagara Falls, Nietzsche’s and Ironworks Buffalo, Whirlybird Music & Arts Fest, and the 20th Annual Music is Art Festival founded by the Goo Goo Doll’s Robby Takac. Her music has been featured on radio stations such as Thunder 102 in Sullivan County, WBFO The Bridge, Broadway World, NYS Music, and has earned spots on various other independent Spotify playlists.

All Music Magazine called her “a force to be reckoned with.” She was also recently a quarter finalist in this year’s competition to open at the Hollywood Bowl. Her debut EP: Stay Mine and latest single “love makes me sad” are out now on all platforms. You can catch her next performance on New Year’s Eve at Nietzsche’s in Buffalo.