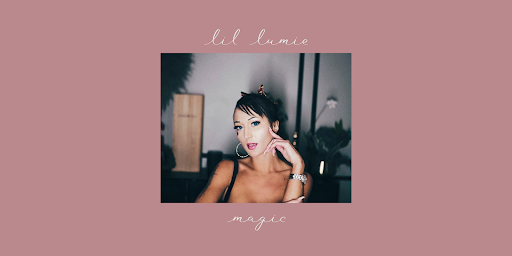 Lil Lumie is a perfect example of the modern day pop artist. Devling through various styles and sensibilities within pop, she has delved through various styles and has introduced us all to her individual and ethereal pop sound that has resonated with many so far. Already amassing hundreds of thousands of streams on Spotify alone, Lumie has found an invested audience quickly, which just showcases her talent and potential as an artist.

After breaking onto the scene in 2021, she began embarking on her debut album ‘Fairy Gang’ produced with Jake Levant, and innovated an R&B and melancholic hip-hop into her music. Not stopping there, Lumie has now released a follow up EP to begin 2022 in ‘Magic’, a 6-track EP full of vibrant, colourful and soulful pop music.

Title track ‘Magic’ is everything that her album insured and more. Upon the first listen it seems like a modern day pop song, but this is where Lumie stands out. As the song progresses, more percussion elements enter as well as layered harmonies and groove-laden bass line, making for a superbly smooth and emotive R&B and pop infused song. Sonically, it is moving and keeps you involved with her brilliant vocals that are distinctive from the first second.

An accomplished body of work once again, Lil Lumie will quickly establish herself as one of the pop artists to watch for 2022, and this EP will only enforce this opinion.

Speaking on the meaning behind ‘Magic’ Lil lumie says:

“Because of the darkness I experienced, I realized the only way through was to become the light.”