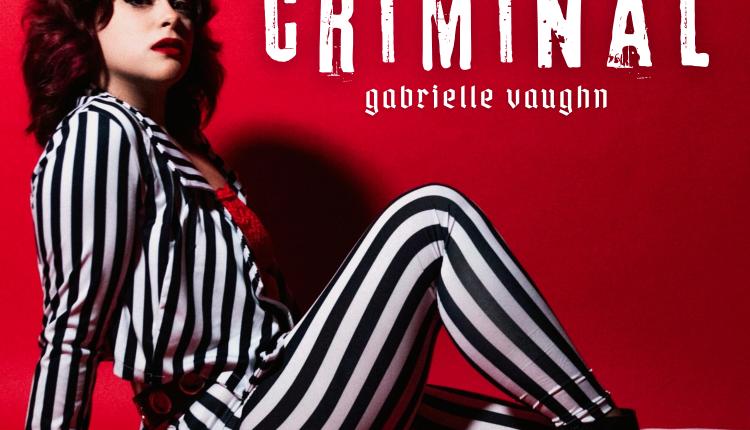 Singer-songwriter Gabrielle Vaughn, one-third of Nashville girl group ElectraQueens, has debuted a solo single “Criminal” that showcases the Ohio native’s tenacious rock-and-roll spirit. Opening with the sound of a car zooming away on a blacktop, Vaughn unfurls the story of a sexy Bonnie-and-Clyde romance.

The gritty lyricism evokes the image of bright headlights, cigarette smoke, and leather jackets (“Dirty ride, got my lover inside/Severed ties while I’m counting my knives/Feel my heartbeat rush, from the dark in your touch/Saying hush, as they’re gaining on us”) that encompass the dark rock-based aesthetic that the singer exudes.

“Criminal” showcases the power of a good guitar and bass riff that is revisited throughout the song and ties a common thread from the electrifying beginning to the bitter end. Though Vaughn’s caper ends in defeat, the journey along the way is a wild success.

Gabrielle Vaughn is a force, always bringing a fiery performance and a presence of glam rock whenever she steps on stage. Known for her rich alto tone, poignant persona, and next-level dynamic on stage, Vaughn is recognizable as a unique talent in Nashville.

She grew up in the Northwestern Ohio region, and has dreamed of superstardom since the age of three, when she started singing and “writing” her own songs. She went on to perform in countless venues around the Ohio area, starting professionally gigging at the age of 12 alongside mentor Dave Phillips.

Vaughn then went on to join her schools choirs, musicals, plays, and talent shows, where she found her true passion for singing, acting, and performance. Gabrielle Vaughn is a proud alumni of Findlay First Edition Show Choir, which has been nationally ranked and recognized since its start in 1985 (and has bred members such as Broadway’s very own Tony and Olivier-winning Gavin Creel).

Like many of her musical influences (Lady Gaga, Amy Winehouse, Alanis Morissette), Vaughn puts distinct themes in her songs such as suffering, darkness, and rising from the ashes. These themes relate back to her personal trauma and battles with mental and chronic illness.

Gabrielle Vaughn has created a distinct sound, weaving and bending through the genres of pop, rock, soul, R&B, and alternative. Vaughn has created a sound that will have you begging for more of those heavy riffs, slamming bass, and Vaughn’s electrifying vocals. Vaughn has been seen around Nashville, performing at venues such as City Winery and The End, and also on tour dates to the east coast.

Vaughn is also a member of the all-female supergroup ElectraQueens, who have seen massive success in the last year. ElectraQueens are an all-female, cross-genre-blending band like no other. They recently collaborated with The Bacon Brothers on a recent release of their new EP ‘Erato,’ “Let Me Happen to You Girl” and Kathy Sledge of “Sister Sledge” fame on a cover of “You Are Everything” by The Stylistics.

ElectraQueens have started growing their roots on the TikTok platform, and now have 100K+ followers after the success of their “duet” style videos, which you can watch here.

ElectraQueens recently made their City Winery debut in Nashville for two shows, performing alongside The Bacon Brothers (Kevin Bacon and Michael Bacon) and their legendary band.

Gabrielle Vaughn will continue to roll out new music this year, which will be produced by Jesse Brock (Notelle, Lines in the Sky), and played on by her band members (James Wittenmyer – guitar, Noah Klibonoff – bass, Bowman Brock – drums).