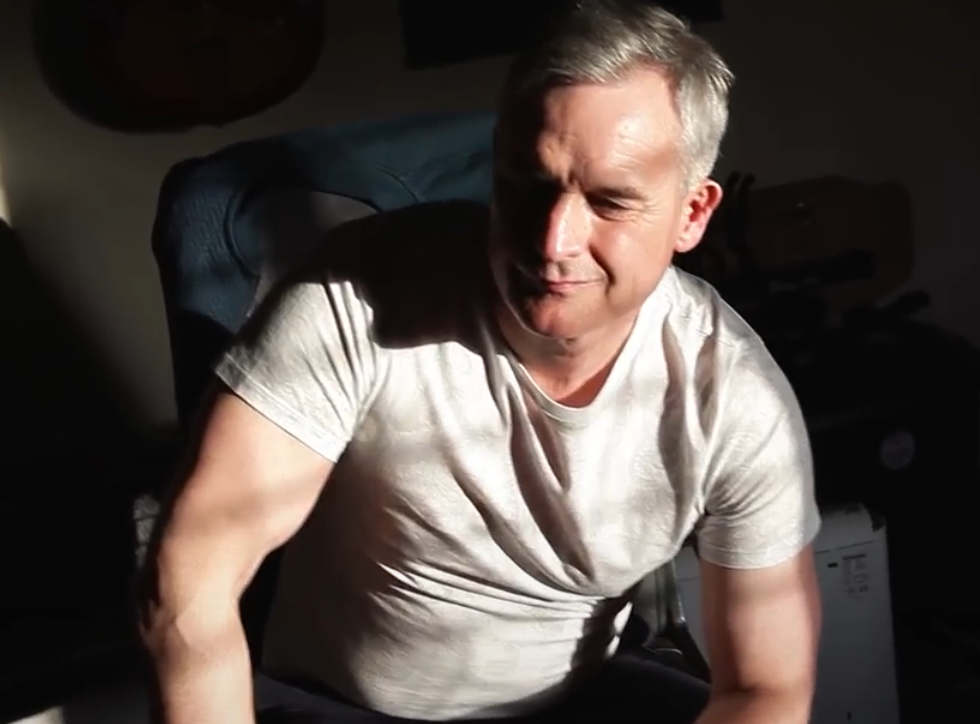 In anticipation of his upcoming two new singles with Tom Williams of ‘Red Rum Club’ we’re excited to share an exclusive interview with multi-tamed Liverpool songwriter and musician Stephen Lawson.

Stephen Lawson is a self-produced multi-talented musician, who sings unique and compelling songs. Stephen Lawson has figured out who he is, what he wants and has found a unique, profound, and deeply moving way to communicate it.Check out the interview beneath and be sure to to watch “Another Place” afterwards.

WATCH ‘ANOTHER PLACE’ BY BLUENOSE B BELOW

Can you briefly introduce yourself for those of us who don’t know you?

Hi I’m Stephen Lawson. I am a Liverpool songwriter and musician who has been active since I was very young in the early eighties. Primarily I was a post punk artist however as time moved on and my skills developed I moved through all genres. I have been played extensively on Radio 1 and toured with acts such as the Farm and the Mighty Wah. Currently I am working with many singers and musicians writing and recording albums, such as John and Virgina kettle from Merry Hell, Tom Williams from Redrum Club, David Billows from Red dog, Jack Hillidge and Rachel Lawson

What inspired the brand name ‘Bluenose B’ and when was it founded?

I founded the band with my cousin David Billows and brother Michael Lawson in 1983. At that time there was very little work and we as struggling musicians had to queue in the cold to sign on for Dole money. One day it was snowing so hard that I noted everyone in the snaking queue had a blue nose. The B is an expletive, as I felt that was the opinion of those signing us on. Nowadays the phrase has a football connotation.

You have an upcoming album titled ‘Harrowby Road’. What should your fans expect from the album in general?

Although myself, brothers, sisters and friends came from an impoverished background with little positive schooling etc, we were very lucky to live on the North Liverpool / South Sefton Coast. We lived in a large house in HarrowbyRoad and my friends often stayed with us, eating our food which my mum struggled to put on the tabl. It was a safe place to stay. We would experience the coastline and forests of South and North Sefton. It is a very beautiful place. Harrowby Road was the gateway to those positive times.

Your recent single “Another place” was written when you where looking after your mum when she was ill. How where you able to balance this situation with your musical career?

I am a trained nurse as are my sisters. We were very lucky to be able to care for my mum. To be honest the period was probably the most creative I have been. I tend to express emotion through music and with the lockdown and using new technology the album was written and recorded in less than 6 months. I would write as I sat with my mum.

NME, Liverpool Echo, BBC Radio 1 (John Peel and Janice Long) to name a few have supported your career so far. I would like to know the areas that you might be needing support in if any individual or brand is willing to support your career?

Exposure such as you are providing. Thanks. The opportunity to recommence gigging (lockdown permitting). Radio plays and critiques of the music, I am very proud of it but input from external sources is always useful. The opportunity to work with Niles Rogers or Ken Nelson (not going to happen).

Your are working on two new singles with Tom Williams of ‘Red Rum Club’. Can you share with us a brief insight about the forthcoming singles and the possible release date?

The singles are edgy love songs. They discuss the connection between lust and love and how interconnected they can be. I do feel lust gets an extremely bad press, it certainly has helped me stay happy. Maybe when the expression of physical love dwindles so does the romance in a relationship.

What motivated you to go into music and who are your greatest music influences?

I love poetry. I corresponded when I was 9 or 10 with a great hero of mine Alan Bleasedale. I sent him my poetry and he replied with a very complimentary letter. The next step was learning instruments and combining the written word with the music. I tend to express most of my emotion through my songs. John Kettle and I discussed how lucky songwriters are to be able to release strong emotion creatively. It certainly helped me when my mum died.

I love Bowie, Prince, Talking heads, The killers, Die Antwoord and currently glass animals. Radiohead also blow me away. But to be honest the list is too long to complete. I love all styles.

How long have you been making music and what has been your best experience so far?

For 34 years (I did start very young. Touring with the Mighty Wah was superb, being produced by Henry Priestman from the Christians was ace, but working on this album with John kettle has been the pinnacle as it is so personal to me.

Cardi B Gives Offset a Lamborghini for His Birthday