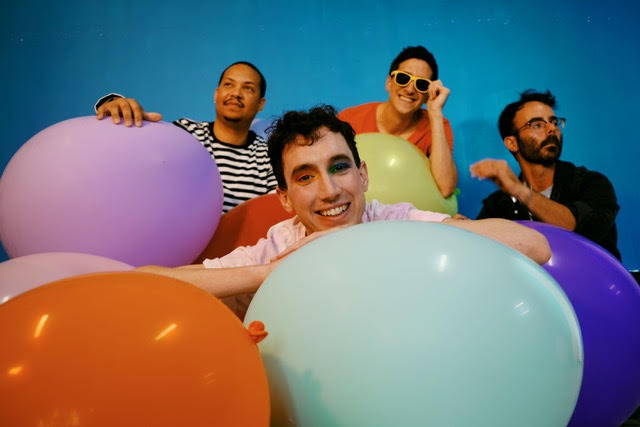 Written about living at the intersection of having a Grindr account and an anxiety disorder, ‘Breathe’ follows our lead singer on his voyage to connection, from linking with strangers online to trying to eliminate long-held fears of intimacy and craft a valuable relationship.

“It is about my experience being terrified to meet up with people on dating apps – out of fear of connection, or out of fear of letting them down and not meeting their expectations – or feeling like I wouldn’t ‘know what I was doing’,” Michael says.

“In the verses, I’m saying that even if I were to get everything else in my life figured out, I would still never get over this particular anxiety, as it is too massive and all-encompassing.”

But as the lowered bridge of ‘Breathe’ approaches, we witness Michael’s falsetto increasingly soar. “Breathe, my inner child, breathe through this,” he urges, before a fulmination of synths blast into the final chorus – indicating the erasure of his fears and the letting down of his guard. He dives headfirst into the sphere of online dating and, thus, the uncynical –  and deeply vulnerable – search for true love.

‘Breathe’ comes attached with retrogressive visuals directed by Phe Studios in Brooklyn, New York. Re-enactments of 80s exercise classes with vintage elements of VHS filters make for a fun, breezy throwback video which perfectly encapsulates the nature of the song.

In addition, the band’s performance gently touches on facing your inner-anxieties, and amongst the adrenaline rush caused by their workout, the Darlin’ boys find themselves emotionally exhausted by the end of it – a subtle nod to the track’s deeper lyrical struggles.

Formed in 2019, Darlin! The Band is the combination of two musical universes. Michael had spent years as a staple cabaret act in NYC’s underground queer theatre scene. Wesley, Can, and Ben, meanwhile, had been cutting their teeth in renowned NYC venues with other bands. Via one preternatural Craigslist ad, the four found each other. And now, Darlin! The Band fuses the worlds of its mates to create a candescent blend of glowing synths, confessional songwriting, clangourous rhythms and grooving textures.