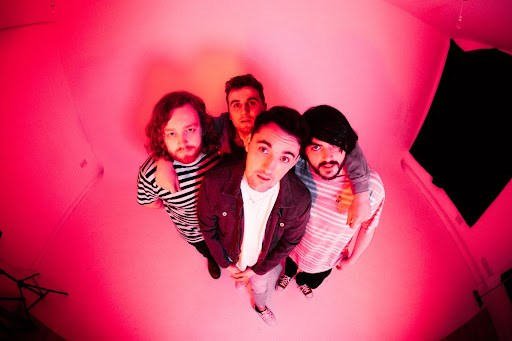 Cloud House are an alternative pop/indie-rock band, based in Glasgow. The band are proud of their Scottish roots and this is reflected within their music. Now the four-piece return with festival ready summer track ‘Set You Free’. The vibrant offering flaunts Cloud House’s charming musicality and thoughtful lyrics.

‘Set You Free’ is deeply personal and the tender, honest lyrics about coping with loss contrast with the jubilant feel of the guitar and synth parts. The artwork is actually a photo of band member Patrick’s late father, playing the same fender stratocaster that Cloud House now use live and in the studio. This track was produced and mixed by Bruce Rintoul (Fatherson, Twin Atlantic, Vukovi, Vistas, Vanives), who also worked with the band on previous releases ‘Signs’ and ‘Wild Eyes’.

The song itself is actually nearly ten years old – first written for his late father in 2013 by lead guitarist Patrick Wallace. The original track was a much slower, sombre folk song – but the band decided to pay tribute to the original by keeping the lyrics, but fashioning it into a much more upbeat, chart ready single.

Lead singer Conor McCarry said ‘I’d always really liked the original version of Set You Free, but the folky sound didn’t quite work for us in rehearsal. We didn’t want to let it go and just tried playing it much, much faster on the electric guitar – something clicked and it’s really nice to be able to play such an upbeat song that has such a personal and emotional feel to it’.

Hailing from Glasgow, Cloud House combine their love for artists such as Biffy Clyro, Snow Patrol, Green Day, Inhaler and Sam Fender and this is demonstrated through their “distinctive, signature sound of catchy guitar riffs and raw, heartfelt lyrics”.

2021 was a big year for the band – they released their debut EP, Days Changed in February alongside a vinyl release. They then sold out their headline show at the King Tut’s Summer Nights Festival, before playing with Cassia at St Luke’s. Boasting a “genuinely impressive live set” whilst also being named as “One to watch in 2022” by The Weekender, Cloud House are gearing up for a number of higher profile gigs and festival slots as they aim to leave their mark on the Scottish music scene and beyond.