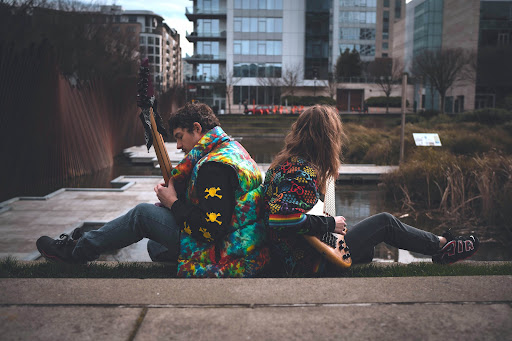 Berried Alive are a genre-bending edm-metal-pop duo made up of husband and wife, Charles and Kaylie Caswell. The pair now unveil their vibrant yet dark offering ‘Pearanoid’. This track perfectly captures the emotions at play by combining a wistful vocal line with biting guitars and introspective lyrics.

Charles and Kaylie on the inspiration behind ‘Pearanoid’:


“The song addresses paranoia, anxiety, and other mental health symptoms that many people suffer frequently. Even though deep down a person knows that he or she should be grateful for what they have, this knowledge can be clouded by poor mental health. We know a lot of fans feel this way, and want them to know they’re not alone because we believe it’s going to make a positive difference for our fans to know we feel the same way they do.”

‘Pearanoid’ is another fruity release for the alt-rock tag team, following on from their first release of 2022 ‘Sit There Like A Lemon’, which won the support of publications such as Clash Magazine, New Noise, Loud Hacker and more.

The single arrives with a sleek music video directed by Scott Hansen. A heist inspired storyline seems to represent the thoughts the narrator is trying to keep at bay, and ultimately defeats with the power of music. The video also included collaborations with stuntman/actor Justin Chavers (The Walking Dead, The Suicide Squad, Stranger Things) and stunt director Jenin Gonzalez (The Suicide Squad, Zombieland, Ozark).

For the production of the track Berried Alive teamed up with acclaimed producer Kevin Cho AKA K.Chozen, who has worked with B.A.P., Big Sean, Kanye West, Ne-Yo, John Legend, Ty Dolla $ign, and J.Cole to name a few! He also co-wrote the song “I Am Legend” for Atlantic Records’ Joe Moses and “Como Le Hago” for Latin artist Ezio Oliva, which has over 10 million views on Youtube.

Berried Alive’s artistic continuum began in 2012 as a music venture and has since grown into its own brand offering multi-sensory goodies. The band’s fearless and infectious songs, dazzling musicianship, and theatrical flair have attracted 10 million YouTube views, millions of Spotify listeners and radio play from Triple J. Their songs have also attracted fan-shares by such notable modern icons as Rage Against the Machine’s Tom Morello, Avenged Sevenfold’s Synyster Gates, Mötley Crüe’s Tommy Lee and Deftones’ Stephen Carpenter.

Berried Alive in the present day is more than just the music, it is a whimsical and colorful lifestyle brand with an ever-expanding menu of commercial offerings, including most recently their own branded beer! Behind the genre-defying music, playful but upscale clothing, and clever marketing ideas is simply a freewheeling artistic dialogue. “We are something you can listen to, something you can wear, and, now, something you can taste,” Charles says with a good-natured laugh. “We want to offer something creative for all senses,” Kaylie adds.

The couple create together fluidly with each having input in songwriting, clothing design, and product lines. Charles produces, mixes, and masters Berried Alive’s music, freeing the brand and band’s budget up for clothing, immersive videos, and future offerings. Kaylie contributes lyrics, clothing designs, occasional basslines, and together they brainstorm marketing concepts.

The fantastical world of Berried Alive dates back to something of humble but fairytale-ish beginnings. Charles and Kaylie met in first grade, but didn’t start dating until high school. Early on in their relationship, Charles noticed Kaylie’s gift and aptitude for fashion as she had drawings of models and clothing designs strewn around her room. At the time, Charles was a tech-metal guitar wizard playing in bands and touring, but he was evolving into a solitary artist, moving away from the drama and the grind of being in a rock band.

The musical entity known as Berried Alive was something of a side project named after a suggestion by Kaylie. “It was a sort of a play and pun on all the dark names in the metal community at the time,” she recalls. The pair’s aesthetics eventually merged, and the couple sought to develop a unique merchandise line that went beyond band tees. This became Berried Alive’s clothing line. To date, Berried Alive has become a self-sustaining business propelled by the marketing savvy of two individuals who had a vision and the hard work to pursue it. All of their success has been based on instincts and following their artistic vision. “We consider it a major achievement to be able to fulfill our dreams without having to go the traditional route of having a record label and touring,” Kaylie says. Adds Charles: “It’s so meaningful we can do this together, and so special it’s become a full-time job. We’re very grateful.”