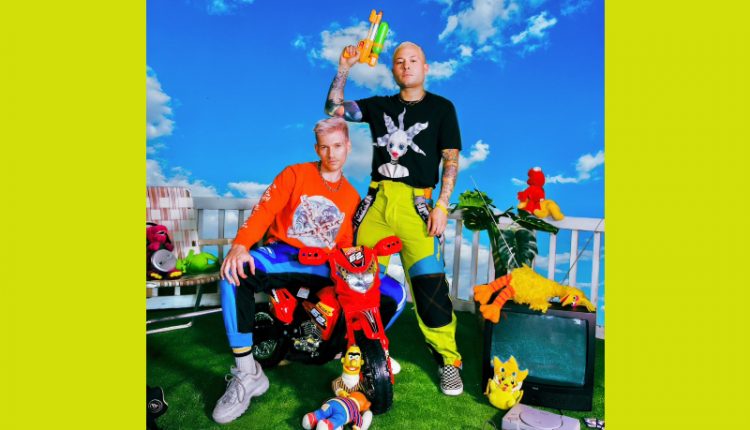 Channeling in on the crazy ex trope, pop artists Bentley Robles and Gregory Dillon have teamed up to write a razor sharp anthem that delivers a simple message to their past flings: “you’re so f*cking stupid.” Despite promises to play nice, Robles and Dillon realized they both had some impeccable break-up credentials to boast. The two quickly channeled their experiences into 2 minutes of pure viral pop-punk IDGAF energy that lends to the likes of Gayle’s “ABCDEFU.”

Riding around suburban streets while blasting their track in Teletubby costumes seems to only be the beginning of their newfound havoc, as the duo captures their escapades on camera across New York City, including the red carpet at The Wavy Awards where Robles was nominated for song of the year. On his inspiration behind the song, Bentley Robles says: “I wrote DL2TS after my most recent relationship began to unsurprisingly circle the drain. DL2TS

is my IDGAF anthem anthem – I’d talk to you more about the ex, but in the true fashion of the song – he’s fucking stupid.”

Approaching 7 million streams across their combined catalogs and intense internet demand for a collab, DL2TS is hazed in a addictive punk sound clearly evolved from the pop perfection that led them to becoming habitual editorial playlist favorites (Fresh Finds, Obsessed, Out Now). Robles, Hailed by Monster Children as “the future of pop” and Dillon, the “internet sad boy icon of our dreams” (Notion) have truly created a lighting in a bottle track and smashed it like a molotov cocktail. You can see the two perform this song live at The Public Theater on October 2nd and at C’mon Everybody in Brooklyn on November 15th.

Boisterous, impassioned & unapologetically queer, Bentley has become one of the defining voices of New York underground. Born in LA and now based in Brooklyn, Bentley debuted his first single in 2019 and has been writing, producing and releasing songs from his home studio.

He’s performed live at some of New York’s most iconic venues including The Bowery Electric, PIANOS, The Delancey, 3 Dollar Bill, Mercury Lounge, East Berlin and The Museum of Ice Cream. Bentley loves finding new experimental sounds and workshopping lyrics and beats with musical collaborators. His recent release “I Hate The Weekend” has blown up on Spotify, making it on large editorial playlists like Fresh Finds and Obsessed.

Hailed by V Man as an artist that “absolutely needs to be on your radar,” pop superstar Gregory Dillon yearns to bring a complex nostalgia to the mind of the listener. Hailing from a small suburban town in New Hampshire, Gregory moved to Brooklyn in an attempt to find confidence in adulthood, and began constructing a pop fantasy that re-explores the confusing landscape that shaped his youth.

With an 80’s stained sound and a fascination for conceptual design, his style caught the eye of publications such as GAYTIMES, BILLBOARD, and BEDFORD & BOWERY – the last of which writes of Gregory’s sound as “pulsing with a yearning to look backward.”