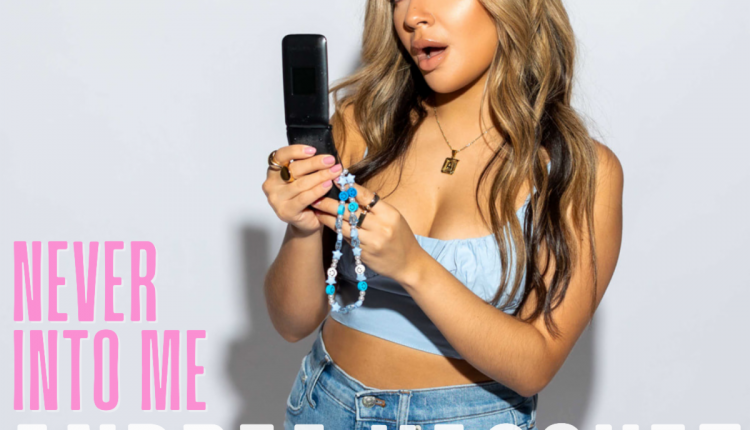 Latin-infused country artist Andrea Vasquez is no stranger to writing emotional ballads and getting personal, but her new fun single Never Into Me is the perfect song to be singing with all your friends. It is now available on all digital streaming platforms, including Spotify, Apple Music, and more.

Never Into Me, written by Andrea and Jessica Hawkes (co-wrote Andrea’s hit Made Me Cry), came from a night of venting with her friends about their bad dating stories and the luck they’d been having, a conversation sure to be relatable to many. “We were like why do we tend to go for these guys that just don’t seem to care,” says Andrea. Through the trials of modern dating and pressure to ‘keep it casual,’ there is an impending feeling that you’ll eventually have to get over someone who was never even into you. “The concept was fun and playful and I think it’ll be a fun anthem for others to relate to.”

Producer Jason Bobo worked with Andrea to create the perfect vibe for Never Into Me. “The pre-chorus later reminded us of the melody in Justin Timberlake’s What Goes Around and we thought it would be fun to mash it up during my live shows. This has been such a crowd pleaser. The fans love it!”

With her previous releases including Reverse and Made Me Cry, which showcases her dynamic vocals and engaging energy, Andrea is becoming a success story that future generations of aspiring country artists who share her Latino heritage will strive to emulate. Her songs have been picked up on several Spotify and Apple Music playlists including the Country Latino playlist.

Powerhouse vocals and unstoppable attitude combine in the petite package that is Andrea Vasquez. The Virginia native has blended her love of modern country and Latin-American roots to create a refreshing sound within the genre. Inspired by the likes of Carrie Underwood, Maren Morris, Shania Twain, and The Chicks, Andrea has been crafting her unique sound since she was little.

Born in L.A. to an extremely musical family, she started playing violin, piano and guitar at a young age which inspired her to also begin writing her own songs. A move back to California would become the catalyst to pursuing music. After finishing school, Andrea packed up for Nashville to realize her dream of a career in country music.

In Nashville, she released her first single Sugar Coat It which surpassed 112k streams on Spotify and took Andrea on her first radio tour. From there, Andrea continued to release music which achieved great feedback and praise, landing on curated playlists, and catching the attention of CMT with her music videos. She has played numerous shows and is a member of the Song Suffragettes, the only all-female country music singer-songwriter weekly show in Nashville. With her undeniable stage presence and songs that match mainstream major quality, Andrea is quickly establishing herself within country music as one to watch.