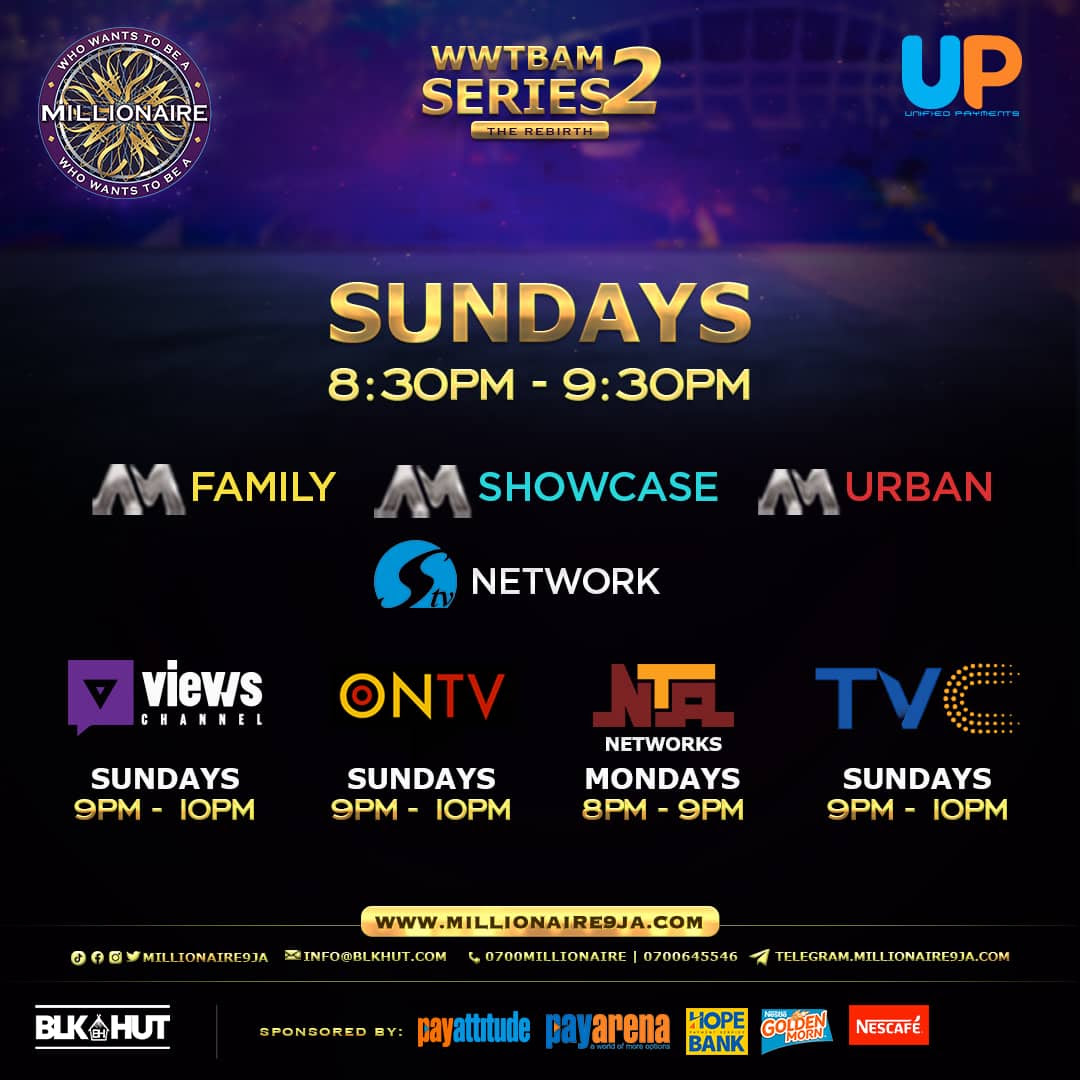 Tonight, March 20, 2022 will unveil the first-ever episode, in a brand new series of the award-winning and ace Nigerian game show based on the original British format — ‘Who Wants to Be a Millionaire? Series 2: The Rebirth‘

Shimmering in brand new set designs and decor initially specified in the United Kingdom, designed in South Africa and fully made in Nigeria with the help of South African technical partners, the signature of the rebirth show is a masterpiece to view and a work of art to reckon with.

According to the CEO of show producers, Blk Hut, a Boutique Consultancy and Agency firm that offers a range of services in Media Production and Entertainment Business in Nigeria, Hakeem Condotti, “There are three main types of sets for ‘Who Wants To Be A Millionaire. The best one is used in the UK, the other in Israel and the middle east and the third, in South America and Africa. We were given the option of using any of them but decided to go for the same one as the UK. I’m excited about our new set as Three Nigerian companies came together to make sure the set was built to the required specifications — a testament to what can be produced here in Nigeria“.

Hosting a private premiere party of the return of this number 1 TV game show in Nigeria, in a gathering that will bring together in audience, a profusion of HNIs, celebrities, influencers and social butterflies, this event is guaranteed to ensure that the 300 carefully selected guests experience the ‘hot seat’ and beyond. With a cinematic view and feel at IMAX Cinema, Lekki, Lagos, which lines the event’s black carpet for 6 pm and the main event, 8.30 pm, this epochal event is already primed to be truly unforgettable.

‘Who Wants To Be A Millionaire’ Series 2 — The Rebirth hosted by seasoned, charismatic and inimitable broadcaster, Frank Edoho, and whose production is under license from Sony Pictures Television with a new staggering prize money of N20,000,000, is set to revolutionise the history of television production in Nigeria, Africa and the world.

ABOUT ‘WHO WANTS TO BE A MILLIONAIRE?’

‘Who Wants to Be a Millionaire?’ Series 2 – The Rebirth, produced by BLK Hut and sponsored by Unified Payments. BLK Hut is a Boutique Consultancy and Agency firm that offers a range of services in the Media Production and Entertainment Business in Nigeria.  UP® otherwise known as Unified Payment Services Limited, is Nigeria’s premier Payments & Financial Technology company founded in 1997. WWTBAM is under license from  Sony Pictures Television. The show now has a prize money of N20,000,000.

Three lifelines are presented at the beginning of the game to aid contestants, a new lifeline now added for Series 2 – The Rebirth.

Phone a Friend: The contestant calls a friend to aid in answering a question. The contestant has 30 seconds to read the question, the four options, and receive an answer from the friend.

Ask The Host:  This edition ‘Series 2 – The Rebirth’ has a new lifeline called ‘Ask The Host’ This lifeline gives the contestants one chance to ask the host for the answer to the question asked.

Follow us on @millionaire9ja on all social media platforms and turn on your notification for updates.

Photos: Who Wants To Be A Millionaire? Goes Live! Premiere First Episode Of Series 2 – The Rebirth