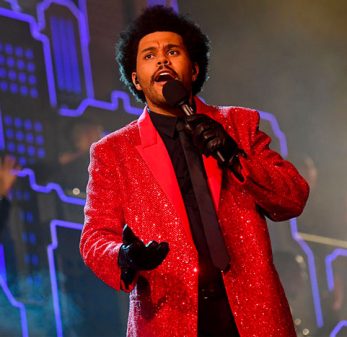 The Weeknd joined Beyoncé, Bruno Mars, and Michael Jackson, becoming the latest artist to headline the Pepsi Super Bowl Halftime Show on Sunday (Feb. 7). The Toronto superstar turned Tampa into Sin City for the 14-minute hit-filled extravaganza that kicked off in the stands at Raymond James Stadium, where the Kansas City Chiefs faced off against the Tampa Bay Buccaneers in Super Bowl LV.

As “Call Out My Name” echoed throughout the stadium, the stage parted before Abel Tesfaye emerged in his signature After Hours red blazer for a clean version of his 2016 smash “Starboy.” Backed by a choir dressed in white robes, he continued with “The Hills.”

The 30-year-old crooner then went backstage for “Can’t Feel My Face” as bandaged-faced dancers joined him in a glowing corridor as the camera spun circles around him. Fireworks lit up the night sky as The Weeknd powered through his Daft Punk-assisted hit “I Feel It Coming” and “Save Your Tears” before being joined by an orchestra for “Earned It.”

Tarah Who? is back with “Manners”