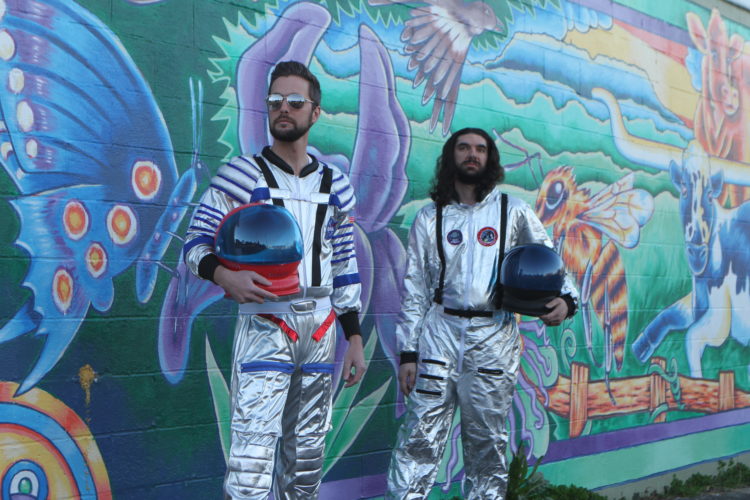 Sleep Nation comes out of the gate swinging with strong electric guitars and  loud, rich drums. The piercing cry in Bran Merritt’s voice compliments the rock-N-roll sound perfectly with his faint raspy flare style.  As “Spaceman” is the first song the band is releasing as a duo, they wanted to make sure it was a strong statement, which is evident in their lyrics: asking the “spaceman” if he even cares about the starving kids digging through the trash while he’s literally up in space with his head in the clouds and his new jeans on.

“First off, ‘SPACEman’ is the first song released as the out of control rock n roll dynamic duo. We recorded everything as a 2-piece except for the bass which was provided by Daisy Dead from the Dead Deads. We met Daisy at Industrial Night at Exit In. We played “The Pot” by Tool together, and got the idea to get her to join in on the song since we didn’t have an official bassist for the band. We were so surprised and thankful that she agreed to join in on the song and the video. So, there is no telling who we could have guests on a song.” – Bran Merritt

Though they never let their heroes from decades past drift too far out of the rearview, one thing’s for certain: the boys of Sleep Nation have their sights set on the future of rock ‘n’ roll. The project was conceived by lead vocalist Bran Merritt in 2010. Drummer Joey Lauretta responded to Merritt’s Facebook ad, the two clicked instantly, and the rest is history! The name “Sleep Nation” was a product of both Anne Le Dressay’s “Sleep is a Country” and Merritt and Lauretta’s habit of sleeping into the afternoon after staying up late writing songs.

The alternative rock outfit has gone on to open for national touring acts such as Adema and Sponge. Because they always give their all for their live shows, they’ve come to be known as the “Out of Control Rock ‘N’ Roll Duo.” Though Merritt and Lauretta are the sole members of the group, Sleep Nation’s sound and presence rivals that of a full orchestra.