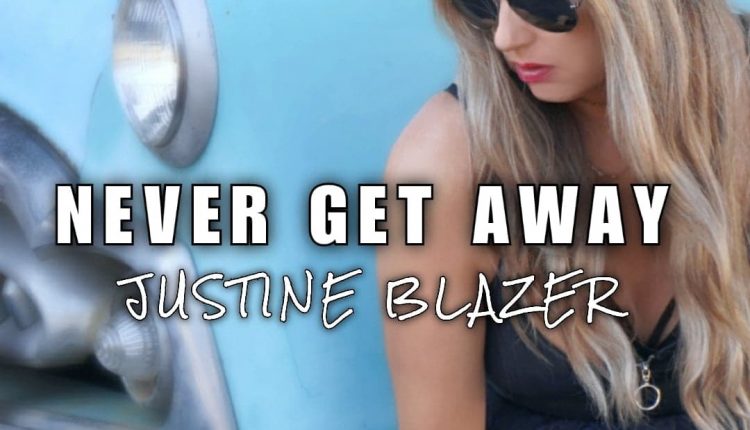 “This song is a rockin’, bluesy anthem written by Lou Molitch and I,” Justine explains. “It’s about ‘us musicians’ having a love/hate relationship with the music industry. This song features Natalie Jean on vocals, Kitt Wakeley on piano and Kerry Adams on guitar. We love the music-making part and hate the industry aspect…but in the end, we can never get away.”

She continues, “We filmed this video in Printers Alley in downtown Nashville. Even when our videographer, Mexx Heart, was filming, we experienced what this entire song embodies! From getting yelled at by residents because ‘the music was too loud,’ to patrons mocking us – we experienced it all.  In the video, we tried to display four examples of some things we deal with on a regular basis: asking us to play for free and for exposure only, men trying to grab at us while we’re trying to head to a show, showing up to find the venue is closed, and having people making fun of us.  But, we love the music and have that passion. I hope people see the energy in this video and dig the song!”

The album has been receiving rave reviews from fans, radio and press, and has been featured in publications like Billboard Magazine, Spinex Music, Broadway World, Nash in Tune, The Sounds Won’t Stop and more. She was also featured on the cover of Lazie Indie Music Magazine‘s August edition.

Nashville-based producer, singer, songwriter, composer and recording artist Justine Blazer has been taking the musical world by storm – earning seven #1 singles on various independent charts. Her unique style of edgy country/pop/rock is infused with a hint of Detroit soul and modern vibes. She is a member of The Recording Academy/GRAMMYs, Country Music Association and Academy of Country Music.