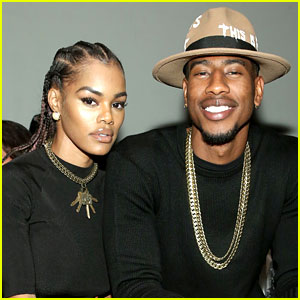 The baby who was named Rue Rose Shumpert was born in the bathroom a day after the couple celebrated their baby shower.

The new was made known by Teyana’s husband Iman Shumpert, on social media along with video of his newborn daughter. “At 3:28 am on Sept 6th 2020 Rue Rose 🌹 decided that the baby shower thrown for her and mommy was too lit,” wrote the proud dad. “She didn’t make the party but she managed to make the next day her birthdate!!!”

At 3:28 am on Sept 6th 2020 Rue Rose 🌹 decided that the baby shower thrown for her and mommy was too lit. She didn’t make the party but she managed to make the next day her birthdate!!! Now…when we buy homes, we always find a bathroom with great energy… but not in a million years would you be able to tell me we’d deliver both of our daughters in a bathroom without the assistance of a hospital! Our newest edition entered the world in the water and came out looking around and ready to explore! A healthy child. A little sister. Another daughter. Black love wins….again. Welcome babygirl…we love you! 🌹 @babyruerose