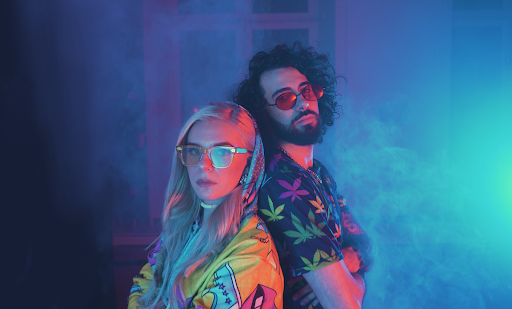 Sweden natives Maximillian and Sanna are the Stockholm-based producer and singer duo Almost Orange, heavily influenced by electronic and french house. Songwriter and singer Sanna Martinez hails from northern Sweden and has risen through the ranks featuring on huge artists’ releases including QUIX and Max Styler on Steve Aoki’s label Dimmak Records, while Maximillian made a cover of Cazzette’s single ‘Sleepless’ which picked up support from Avicii’s manager. The duo wrote ‘Guiding Light’ which gained over 2.5 millions streams worldwide and ‘Body High’ the number one single from Styler’s album. Their sound boasts a Daft Punk-esque style with their latest single ‘Infatuation’ revealing an ever-on trend, pop-tinged affair this May.

Opening with Sanna’s effortless and flawless vocals, ‘Infatuation’ leads with a taught bassline, low-slung drums and warped effects. Maximilian’s love for that french touch in production makes it the perfect combination of dance-pop and nu-disco that packs a punch, while being designed to get listeners moving, it will undeniably have a high impact for the coming weeks and months ahead.

“Infatuation is a song about having so much chemistry and love for someone it spills over. You’re no longer able to tell if there’s anything wrong in the relationship or not able to see any red flags. The song captures the essence of the possibility that you might be blinded by the infatuation but there is really nothing you can do about it.” – Almost Orange Almost Orange consists of two highly impressive talents Maximillian and Sanna. The pair travelled to LA during an internship at Musikmakarna (Songwriters Academy of Sweden) to work in 2019, where they wrote songs for artists such as Max Styler and QUIX. Sanna is a multi-faceted singer and songwriter who participated this year in Eurovision Song contest in Iceland with ‘Keep It Cool’.Their sound is heavily influenced by the likes of Daft Punk, Dua Lipa and Galantis. Last year welcomed the arrival of two debut singles ‘Waggle Dance’ and ‘Mouth To Feed’, while May unveils an exciting month, as the pair returns with renewed energy across  ‘Infatuation’ – showcasing their love for vibrant melodies and funky euphoric vocoder synths.