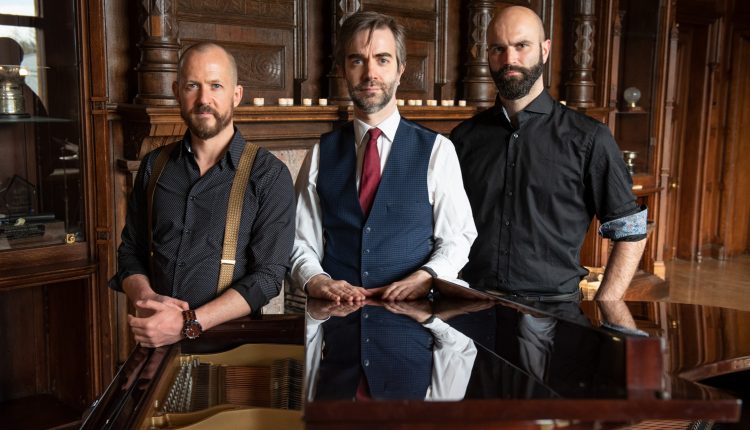 Jazz newcomers, Rich Meehan Trio return with the stunning new single ‘Gymnopedie’. The second single to be taken from the upcoming EP ‘Suite Antique’, ‘Gymnopedie’ follows the trio’s debut release ‘Prelude’ which saw them gain major support from Jazz FM (Dinner Jazz track of the week) as well as support from the likes of Backseat Mafia and BBC Introducing.

Led by composer and pianist Richard Meehan the trio’s new single ‘Gymnopedie’ blends warming synths (Jon Bierman) with effortlessly breathtaking piano courtesy of Rich himself as the track flows through a series of key changes – chopping and changing between major and minor as the track progresses through a series of interlocking sections. Tight drums from Paul Glover and warming bass from James Newman ground the soundscape, creating a backbone and giving the track a central pin whilst the top lines dances, floating flawlessly from gentle piano-led moments to explosive, theatrical movements.

Talking about ‘Gymnopedie’, Richard explains: “When I sat down to work on a slow track as part of Suite Antique, I had an idea in the back of my head to write a sarabande, a stately dance with a sort of 60s Baroque pop vibe. As is often the case with these things, your fingers and ears have other ideas, and I found myself writing my own tribute to Satie. I think we get him wrong as he was a fierce experimentalist, but we mainly know him from a few pieces of chill out. What I like most about it is the nostalgic turn in the middle section which builds to the climax when the sad melody returns.”

RM Meehan is a highly-experienced composer, arranger, conductor, educator and multi-instrumentalist. His career has spanned the widest range of musical disciplines, and he has led musicians of all levels, always with the intention of producing the best possible results. His compositional approach emphasises craftsmanship, the ability to span genres, and a wry sense of humour, firmly affirming Leonard Bernstein’s opinion that: “There is no serious music or un-serious music, just good music and bad music.”  – www.rmmeehan.com

James Newman has been a professional bass player since around 2009. He has performed and recorded with many bands and artists, toured, played on cruise ships, and with signed artists throughout his career. James is a highly respected music educator alongside his work as a busy professional session player and band member.

Notable Artists include: Jetta (Polydor), Connor Deasy (The Thrills), Amber and the Professors and The Definite Collective