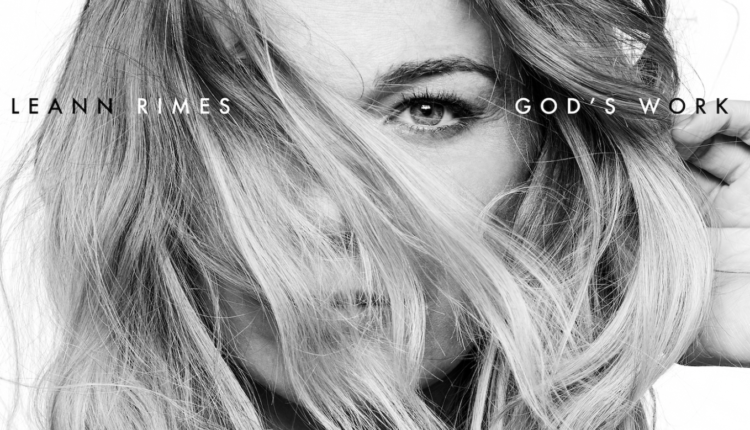 GRAMMY Award-winning singer, songwriter, actress, and author LeAnn Rimes announced her new album, god’s work (EverLe Records via Thirty Tigers/ The Orchard), to be released on Friday, September 16th. The 12-track record features an eclectic group of accomplished artists that bring a genre-bending sound to the album, including Mickey Guyton, Ziggy Marley, Aloe Blacc, Ben Harper, Ledisi, Sheila E., Robert Randolph, and more. god’s work is available for pre-order through the link HERE. Upon purchase, fans will be granted access to “throw my arms around the world” and “i do (Aloe Blacc and LeAnn Rimes duet),” as well as new track “how much a heart can hold,” which Rimes performed earlier today on The View.

Written and produced by Rimes and her longtime collaborator and close friend/producer/songwriter Darrell Brown, god’s work has been nearly three years in the making and puts Rimes’ breathtaking vocals on full display. The track listing includes a mix of ethereal, rhythmic, and brutally honest songs that take each listener on their own unique journey, exploring the duality of life and recognizing the light and the dark that we all encounter. Rimes made a commitment to highlight females in the creation of the album, from the mixing to the recording and mastering, allowing her to fully immerse herself in the vulnerability of the lyrics and sound.

“For me, god’s work was all about a journey of reclamation, where humanity meets spirit,” Rimes said.  “The idea was to really dig into the duality of life, and I needed to be at the place I am in my life now in order to release this record whole-heartedly. It’s so empowering that I am finally there.”

Rimes intentionally chose to go with an all-lowercase album title and track listing, explaining “If we’re arguing about why the ‘g’ is or isn’t capitalized, we’re missing the whole point. It’s so important for us to focus on the teachings, rather than the nuances.”

Rimes will kick off her upcoming tour the story…so far in support of god’s work and her 25th anniversary on May 13th. Full list tour dates here: https://leannrimes.com/tour-all-events/.

Feelz Releases New Single”Will You Be My” ft. DeVries