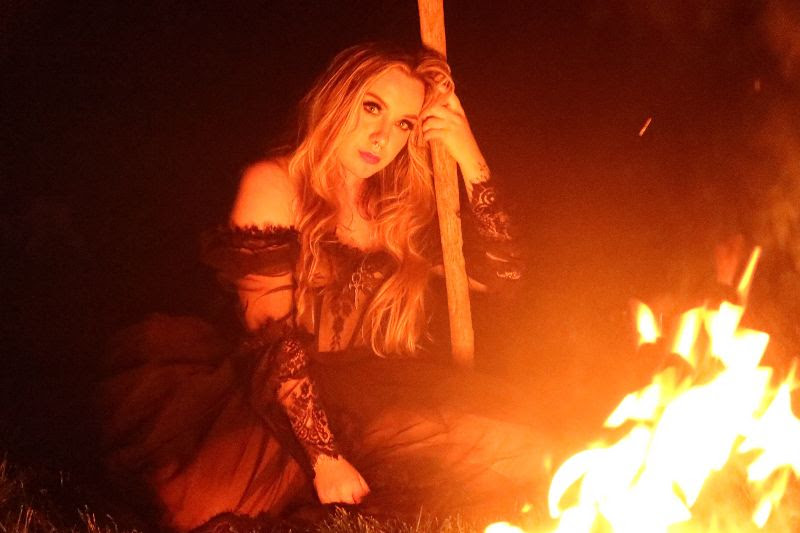 Rising star Bailey James releases the music video for her latest single, “The Spell.” The newest music video release from Bailey James, “The Spell,” gives the audience a fantastic rock atmosphere that perfectly complements the song’s energy. The video has a unique and entertaining narrative as it helps amplify Bailey’s empowerment and the song’s lyrics.

As Bailey sings lines such as “under my spell,” the video has dark scenes with a bonfire and brighter scenes of Bailey burning something and chanting surrounded by books, which amplifies the mystic and ‘witchy’ energy from the song.

The shot with James holding burning sage as she sings, “I could put the devil through hell,” is an excellent lyric for video pairing. Other complementary pairings are when James is dressed in white in the forest singing “Boy, you better treat me good” with an immediate camera switch to a black dress surrounded by spell essentials.

The music video helps convey Bailey’s personality, as she does say her family’s heritage in the song, which increases the audience’s connection to it. The video contrasts significantly with the dark scenes being followed by scenes where Bailey is walking peacefully in the light, which gives the video more depth. In addition, the video also has other elements from the lyrics, such as showing her by a river, which she mentions in the song “They drug me down to the river.”

“The Spell” is a compelling music video that will put you under a spell from the first watch.

Bailey James is lighting up Music City with her sophisticated soulful country music. It is hard to fathom that at 19 years of age, Bailey James can bring a crowd to their knees. Much like Janis Joplin, she can hypnotize you with her incredible vocal styling and bluesy riffs. Her swiftly growing audience celebrates her fresh musical adaptation that is well beyond her years. including country roots infused with blues, rock-n-roll and soul.

One of the hardest working young ladies in the music industry with 19 singles and an EP during her six year tenure in Nashville. all released since turning 12 years old. She has laid it down at the legendary Bluebird Cafe, Douglas Corner, The Listening Room, Wildhorse Saloon and has been featured at WSM, home of the Grand Ole Opry Radio Station.

A multi-genre vocalist, guitarist and songwriter with over 250,000 fans across her social media platforms, Bailey released her single “Finally Free” July of 2021. It was named Opry Circle Song of the week, and charted #42 on Billboard Indicator. She is also a Golden Ticket alum of American Idol 2019.

In addition, this rising country songstress and social media sensation was appointed as the first National Youth Advocate for The Jason Foundation. She is dedicated to raising awareness for suicide prevention through education and empowerment on behalf of this important non-profit organization both in her live shows and across her social media. This honor places Bailey alongside longtime Jason Foundation musical ambassadors, Rascal Flatts and the late Charlie Daniels.

She has her feet firmly planted in the country music community.

Listen To “Coma” By Susan Hisey