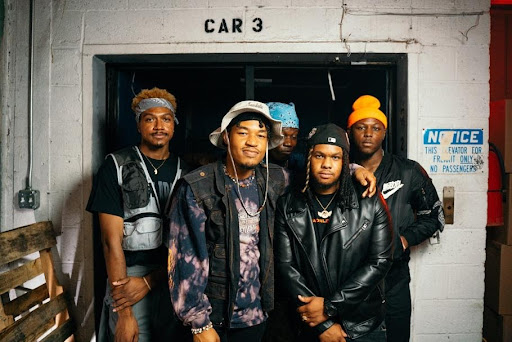 Hip-hop collective VIBE WORLD ORDER have shared their must-hear new single, “LIFT”, alongside accompanying visuals directed by Chris Andrade. Based in Union, New Jersey, the fast-rising collective are currently riding a huge wave of momentum following the release of debut album STILL BROKE – from which “LIFT” is taken.

With their audience continuing to grow with each release since arriving on the scene back in 2018 and landing a spot on the star-studded line-up of the prestigious AFROPUNK Brooklyn festival in 2019, “LIFT” looks set to help the collective round out 2021 in impressive style. The release also comes during an exciting period for them – their song “TERIYAKI” currently features in Amazon Prime Video’s new hit show Fairfax.

“LIFT” showcases the depth of talent and versatility within the collective, highlighting their sharp lyricism and fast and furious rap flows, with each member taking it in turn to deliver their verse with conviction and authority over a gritty, hard-hitting beat produced by group members Reg Mason and JTT. The accompanying video elevates the track even further. It sees the rap collective pursuing an Ocean’s Eleven-style heist to save one of their members who has been taken by some yet-to-be-revealed people – the story will continue in their next video.

Speaking more on the new release, VIBE WORLD ORDER say, “LIFT is a half boastful, half working-class anthem. We think it highlights what we’re able to do despite their being a lack of resources for us where we come from. It’s equal part manifesting what we want and displaying what we have at the moment. It’s a snapshot of what we were all thinking about at the time.”

Writing and producing their own music and firing on all cylinders from production to lyrics and visuals, the collective are quickly becoming a force to be reckoned with. And now with another impressive release under their belt, in addition to the growing acclaim they’re receiving online, it’s clear VIBE WORLD ORDER are an act to watch out for with an exciting future ahead. Their new single, “Lift”, is out now.

Miguel Pregueiro Unveils – For the Night

Eliyanah Release New Single – Somebody Else