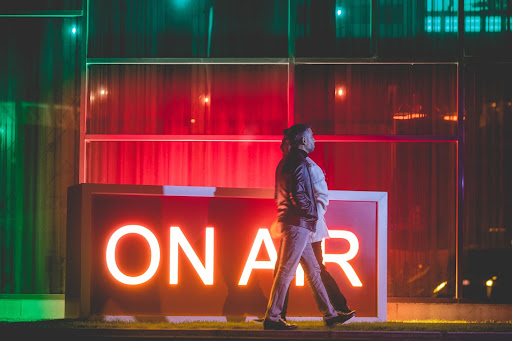 TeleChild are a dubai-based duo made up of two long-time friends (Hadi Baba and Charles Anouzi) who are usually at odds about everything except music. Now the rock and roll tag team return with their debut album ‘Turn On Your Favorite Show’.

A collection of tracks which shines a light on the duo’s enigmatic ability to take their blues/alt-rock sound and give it a modern twist, the album is full of soundscapes which blend airy analogue synths with biting guitar lines and warm vocal delivery.

“Albums are a big deal to us. It’s been a personal goal of ours to create one ever since we became serious about music. Two recording studios, 3 flights, 7 guitars, and a dozen pedals later, not to mention the hundreds of voice notes exchanged, our debut album is finally released. It’s where Charles’ melancholic dreaminess meets Hadi’s sarcastic appeal. Join us through an eclectic sequence of ten alt rock songs made up of loads of melodies, tempo changes, improvised bass and drums, reverb… and hear us chant: “Let’s hide behind our cheers and wine, and try to change our state of mind, the moment you come back home, Turn on Your Favorite Show…”

The album arrives with brand new stand out track ‘Tarantino’. Hadi lends his vocals on this rare occasion, looking back at the turbulence of a relationship that “was bound to end”…

“Tarantino was an unhealthy musical obsession, just like the toxic love affair the song portrays. The biggest challenge we faced was how to keep a song interesting when its rhythm is primarily based on one chord. We ended up with what we think is our grooviest tune on the album.”

Hadi Baba and Charles Anouzi both hail from Lebanon and have collaborated on music composition since their university days. A few years later, they reunited in Dubai and invested their free time on writing an album that just made sense to them. After struggling for sometime to find dedicated musicians to commit to original work, they enlisted Nour Nimri on vocals, Akram Hajj (from Kinematic) on drums, Marwan Tohme (from Postcards) on bass, and recorded their debut album at Tunefork Studios in Lebanon with studio engineer Fadi Tabbal at the helm. Mastering was done by Alex Gordon at Abbey Roads Studios in the UK.

TeleChild’s music puts melodies at its core…sometimes a bit too much but they can’t help it, oh and there’s plenty of guitar riffs and licks in the mix. With a planned 2022 release, their album will feel like a revival of retro alternative rock fused with modern synth and audio effects. The songs explore a variety of themes one can relate to, all the while maintaining a sense of cynicism that might get a chuckle out of the