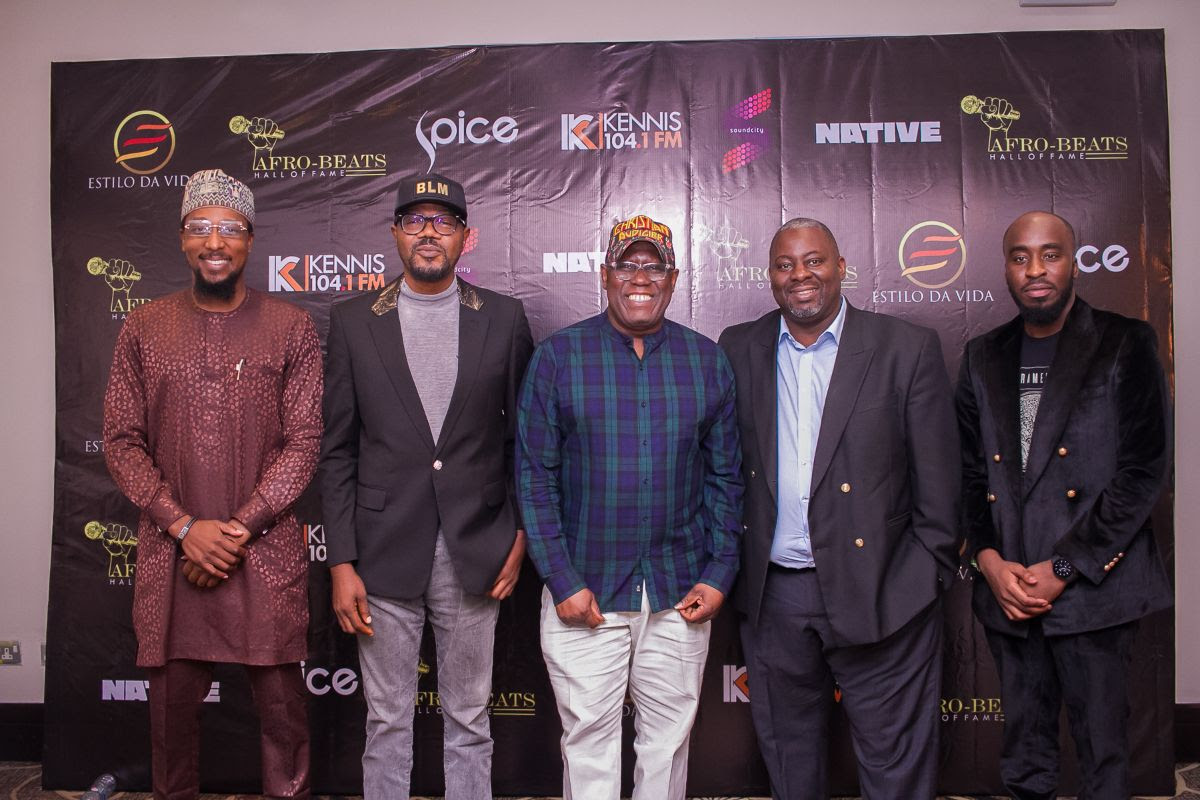 Afrobeats Hall Of Fame Awards & Induction Ceremony To Honour African Artistry & Musical Contributions.Estilo Da Vida, a ground-breaking Nigerian lifestyle, tourism and hospitality consultancy firm announces the Afrobeats Hall of Fame (ABHF) Awards and Induction Ceremony — the first of its kind in Africa, created to pay homage and honour African achievements in music, showcases the African pride of the entertainment industry to celebrate the historic and cultural significance of African music.

Honouring the artistry and the contributions made by those who have played major roles in the dissemination and creation of the art of African music, part of its objectives include inspiring and engaging African people through the power of African music, building a serious level of credibility, respect and acceptance across Africa and the world to celebrate the historic and cultural significance of African music.

Devoted to putting African entertainment legends on a pedestal with the help of leading figures in the industry, Chairman of ABHF’s Blue Ribbon panel, Kenny Ogungbe, during the Media Parley held in Lagos, discussed the mission and inspiration of the Afrobeats hall of Fame, stating that the inductees were carefully selected to appreciate their contributions in the industry over the years.

“Having been in the music industry for over 3 decades, myself and the other Blue Ribbon Panel members, Obi Asika, DJ Jimmy Jatt and Bankuli realised that the only way to preserve our historic culture is to celebrate our legend hence the need to have a hall of fame“.

Obi Asika, Vice Chairman of the Blue Ribbon Panel also added that the inductees for the Afrobeats Hall of Fame (ABHF) are artistes who must have made significant contributions to the development and perpetuation of music in Africa, with notable achievements recorded for the last 20 years and more in African music.

“There are three categories for this award nomination; the early influencers which include the likes of Tunde King, E.T Mensah, Onisha Native Orchestra, E.C Arinze, Victor Olaiya, Mamman Chata and Bobby Benson; the next category — mid influencer category includes Chief Osita Osadebe, Fela Anikulapo Kuti, Rex Lawson, Sikiru Ayinde Barrister, King Sunny Ade, Ebenezer Obey, Dan Maraya Jos, Peacocks Guitar Band International, Hugh Masekela, Miriam Makemba, Salif Keita and Bala Mila. The last category — Modern influencer is up for voting and it has the likes of 2face Idibia, Onyeka Onwenu, Awilo Longomba, The Remedies, Yvonne Chaka Chaka and a host of others while Tony Odili will be getting special recognition for his lifetime achievement in the music industry far back as 70 years ago”.

An intense voting process and selection of the Modern Influencer category will be overseen by The Blue Ribbon Panel who are tasked with selecting inductee nominees each year.

Also speaking at the event, DJ Jimmy Jatt, who is a member of the Blue Ribbon Panel, says the Non-performing category — where resourceful talents who contributed to the development of African music that is not performing artistes like songwriters, producers, disc jockeys, record executives, journalists and other industry professionals who have had a major influence on the expansion of African music — talents that ensured the creation, distribution and global appreciation of African music will be recognized; and the Early pioneers — artistes like Bobby Benson and Ike Dairo, whose music pre-dated Afrobeats but had an impact on the evolution of the music genre and inspired its current leading artistes will also be celebrated. “The idea behind the Afrobeats Hall of Fame is to honour the artistry and contributions made by the veterans who have played major roles in the dissemination and creation of African music globally”.

According to the Managing Director, Estilo Da Vida, Abiola Akinlonu, “Estilo Da Vida lifestyle and cultural icon are conceived to bring back confidence and highlight the best of us, that is, the people, heritage, future and culture via cutting edge platforms“. Bringing this idea to life, Akinlonu mentioned that Afrobeats Hall of Fame is not just an award but an induction ceremony and the first of its kind in Africa.

The ABHF will house the EkoAmore Walkway of Fame, an enclave whose aim is showcasing Nigeria’s best & exceptionality through an amazing canal waterway, a spectacle akin to Hollywood with a sprinkle of Dubai served with the Nigerian originality; and the EkoAmore Walkway of Fame and Musical Fountain, situated on Freedom way, Lekki where walkway stars of inductees will be engraved and also beautified by a musical fountain in the same location.

The Amore – Hall of Fame will preserve all accurate information of African musical legends whose stars have been imprinted on the walkway to educate the general public and honor these legends. This Hall of Fame walk will be centred on educating people on the discovery of African sounds by these musical legends, their propagation, heritage, and cultural value.

Speaking on the partnership between Estilo Da Vida and The Amore Gardens, Akinlonu added that “The EkoAmore walkway of fame monument will be an enclave we can all be proud of, therefore this partnership is a special purpose vehicle essenthating the best of contemporary Nigeria bringing the African culture fused with the best of the western soul and jazz”.

Obaoye who also unveiled the #ABHF, #Afrobeatshall21 and #Afrobeatshalloffame as the official hashtags for the event, the theme song and the #afrobeatshalloffamechallenge, added that “Contestants are to visit the www.afrobeathalloffame.com website to download the Afrobeats Hall of Fame theme song beat, make a one-minute freestyle video to the beat, singing a recreated version of a song of any Inductee of their choice.

This contest, which is open to all Africans with registration conducted via the ABHF website, will run from Monday, November 29, 2021, to January 16, 2022, to enable a thorough selection process before the actual ceremony. Contestants with the highest likes will then be selected — 2 winners will be selected, the first place wins a cash prize of $2000 and the second place wins a cash prize of $1000″.