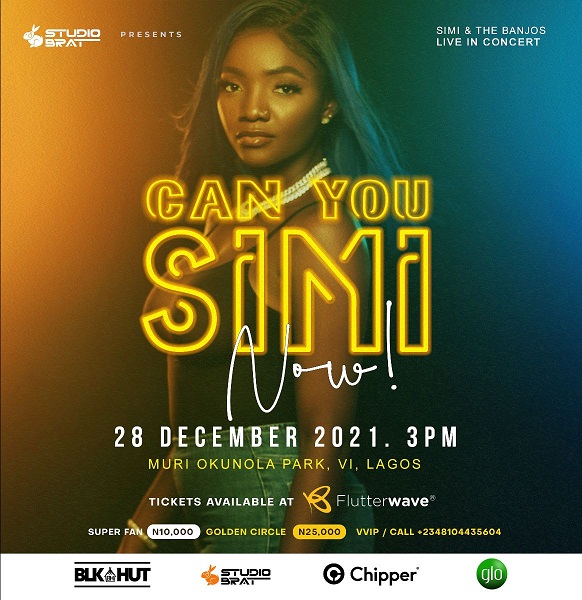 Wildly talented award-winning singer and songwriter, Simi who has just released a brand new single ‘So Bad’ featuring Joeboy, has a ‘detty December’ planned for her fans and lovers of great music. Studio Brat presents “CAN YOU SIMI NOW! Live with the Banjos” a highly-anticipated concert scheduled for December 28, 2021, at the Muri Okunola Park.

Produced by BLK HUT, the 90’s themed event showcasing the star songstress performing her greatest hits, people are expected to attend this concert dressed in 90’s style — a tribute to the era of great music cloaked in a feel-good ambience of the festive season. With brand affiliation to Chipper Cash and Glo Nigeria, Simi has a long list of surprises for her fans and lovers of the Afro R&B genre of music.

In 2018, the phenomenal R&B songstress Simi hosted fans to an exciting concert tagged “Simi Live in Lagos” where she kicked off the concert season with her Simi Live series. The first of the concerts — a sold-out show which featured incredible live performances — tagged, “Simi Live in London”, was held at the O2 Academy, Arlington, London and was dubbed a night of surprises by concert goers, paving the way for the second Live series – “Simi Live in Lagos,” later that year.

With a host of celebrity guests showing up to the London event to support the R&B Queen, performances from Adekunle Gold, Falz, Mr Eazi and Wizkid were part of the standout performances of the night.