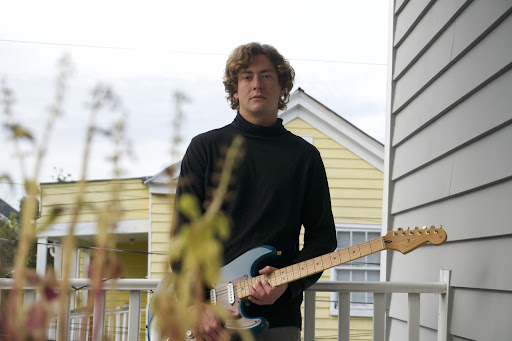 Fo Daniels is a rock and roll project in the truest sense. If modern popular music is over-computerized and under-human, consider this to be counter culture. The debut album ‘Imitation Roses’, set to release April 22nd, is a 10-track LP recorded completely live, all in the same room, in just one day.

This uniquely recorded album shows off Fo Daniels’ authentic rawness and a reliance on strong songwriting and performance rather than studio magic. This is paralleled in the arrival of a new music video for stand out single ‘Summers Past’, which captures nostalgic magic with its lo-fi home-video visuals.

Fo Daniels shares more on the meaning behind ‘Summers Past’:

“‘Summers Past’ is probably the most personal song on the album. It deals with a lot of influential aspects of my life that I also feel can be relatable to a lot of people- growing up with a single mom, feeling out of place, insomnia, and finding a strong sense of purpose in something you love.”

Finding solace in music from a young age, Fo Daniels is a singer-songwriter making music that is a breath of fresh air. Fo originated as a solo project in 2020, with the release of ‘Fast Nickels, Slow Dimes’, a three-track EP of self recorded demos shared to friends and venues in Charleston, SC. After a few months of steady gigging, two more demos were released in ‘Nostalgia and the Night’.

Since then the project has grown to incorporate collaborations with a number of local musicians and visual artists. Fo kicked off 2022 with new singles ‘Hold On Tight’ and ‘This Song Was Not Made For You ‘. Now Fo prepares to unveil a collection of pure rock sounds with the release of his debut album.