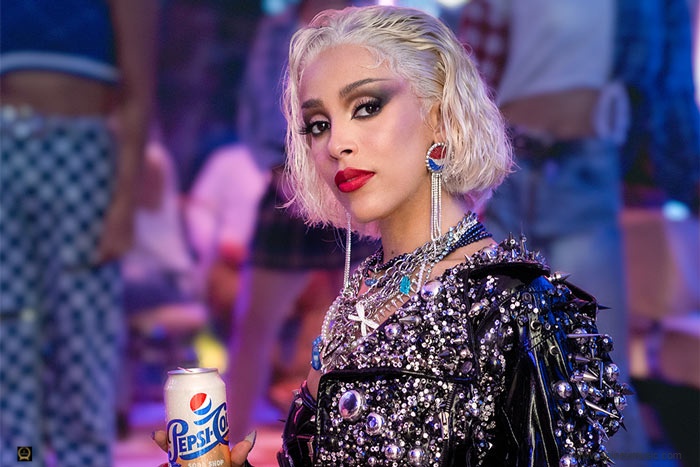 DOJA CAT STARS IN PEPSI COMMERCIAL – Cat is the new face of Pepsi.Following pop icons like Michael Jackson, Beyoncé, and Britney Spears, the “Kiss Me More” singer stars in her own Pepsi campaign to promote the brand’s newest offering, Pepsi-Cola Soda Shop. In the Grease-inspired commercial, directed by Hannah Lux Davis, Doja plays a modern day Sandy as she reimagines one of the most recognizable songs of the soda shop era, “You’re the One That I Want.”

In the dance-heavy clip, choreographed by Sean Bankhead, Doja locks eyes with her very own Danny at Rydell High, but it’s not a man she’s after. While at a diner, Doja dons an updated version of Olivia Newton-John’s black leather jacket and pants from the 1978 musical while in pursuit of an ice-cold can of Pepsi-Cola Soda Shop.

“Working with Pepsi on this remake of ‘You’re the One that I Want’ has been surreal,” said Doja Cat. “It’s such an iconic song and brand, so to have the creative license to put my own spin on it for the launch of Pepsi-Cola Soda Shop was a once-in-a-lifetime opportunity; I had to be a part of it.”

Described as a “modern take on a classic,” Pepsi-Cola Soda Shop will be available in Cream Soda and Black Cherry flavors for a limited time starting Sept. 20.

Doja’s Pepsi spot will air during the 2021 MTV Video Music Awards on Sunday. She will also pull double duty as host and performer.