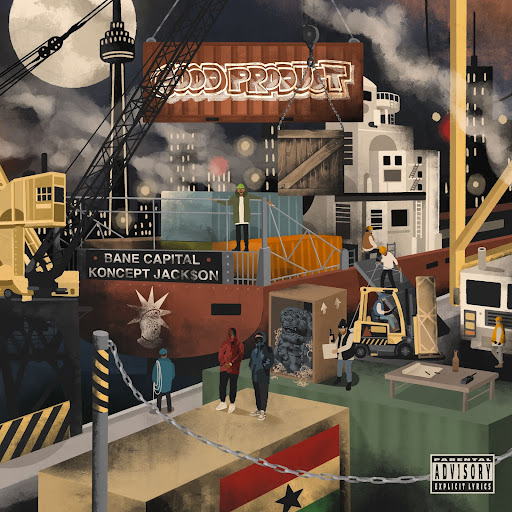 MC Koncept Jack$on has risen through the ranks with a well earned reputation from elite veterans and newcomers in the Hip-Hop scene including Earl Sweatshirt and The Alchemist, while collaborating with Mach-Hommy, Freddie Gibbs, Navy Blue, Pink Siifu, Fly Anakin, ELUCID, Liv.e, KAYANA, Tuamie, DiBia$e and DJ Harrison. Producer duo Bane Capital have a long and revered history in production from their seminal work with legendary Wu-Tang Clan member Raekwon, MED and more. ‘Good Product’ sees the release of Koncept Jack$on and Bane Capital’s most ambitious and ferocious project yet with incredibly dense lyricism and a range of advanced sampling techniques, it’s an album that is not to be missed.

Koncept Jack$on re-emerged in the scene in 2018 as a solo artist with the mixtape series ‘Thot Rap’ which cemented him as a dominant force in the underground Hip-Hop scene. His advanced skills on the mic have garnered high praise and critical acclaim from Pitchfork, Exclaim!, Okayplayer and many more, as well as support from many greats in the scene. On ‘Good Product’ Bane Capital work the MPC and SP suite of devices to their limits to create a focused, future-oriented sound in the tradition of Madlib, MF Doom, The Alchemist and Pete Rock.