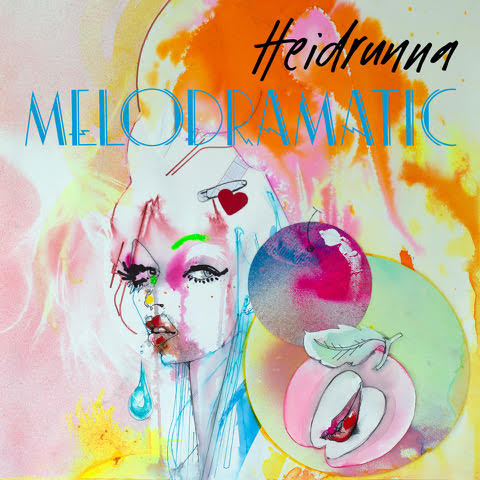 Blurring the lines of glorified 80s elation with the glossiness of the 21st century, Nordic import Heidrunna constructs a chain reaction of rhapsodic melodies in Melodramatic as she crusades through lust, heartache and the catastrophes of love. Drawing influence from old school pop songwriting, Melodramatic is the result of Heidrunna’s adoration for classic hooks and greatest hits records. Simultaneously, she sought inspiration through the likes of Beach House, Charlotte Gainsbourg, Lykke Li, Vanessa Paradise, Blondie and The Weeknd to uncover the sonics she would soon utilise for her bold introduction.

Enriched with ten lustrous tracks that showcase Heidrunna’s whimsical vocals to great effect, her debut album constructs a harmonious utopia that promises to send you into a synthesized frenzy in the best possible way.

Highlights include the larger-than-life ‘Borderline’ – with angelic vocals and crafted-to-perfection synth work, and the woozy pop gem ‘Love Don’t Come Easy’ whichbloomedtofruition in a writing session for Kylie Minogue. The sentimental ‘Daydreamer’ reminisces for long-lost romance, lifting the veil to become the album’s most vulnerable moment. Whilst in contrast, ‘Erasing You’ is one of the record’s most iridescent, delving into the push and pull of relationships: “It’s about the emotions and tiredness of stopping and starting,” says Heidrunna. “And deciding that maybe the only way to stop it is to erase everything about that person and never pick up the phone again…” There’s more heartbreak on the delicate ‘No Valium,’ whilst title track ‘Call It Melodramatic’ resumes velocity with its poignant synths and earworm chorus. ‘You Can Go Your Own Way’ is the perfect soundtrack to summer and with the club ready ‘Cindy’ we finally hear Heidrunna sing in her native Icelandic – an homage Cindy Lauper’s ‘Girls Just Wanna Have Fun.’

And don’t miss the Prince-inspired ‘You Make Me Feel’ and the album’s closer ‘All Cried Out’ no doubt acquiring the darkest melodies on the record, written at a gruelling period of loss and appropriately placed as Melodramatic’s toilful send off.

Honest and sincere, Melodramatic encapsulates Heidrunna’s beguiling aura in the space of ten exceptionally crafted electro-pop jewels. Onboard for production is Liam Howe, whose portfolio includes Lana Del Rey, MARINA, FKA twigs and Ellie Goulding. With Melodramatic, he and Heidrunna have rewritten the guidebook, conjuring up the kind of impenetrably-authentic ‘80s backdrop that you’d be hard pushed to pick out in a line-up of the finest electronic albums of an era it seeks to emulate and acknowledge in equal measure. Album artwork and single covers were designed by fashion illustrator Julia Verhoeven who has had works widely exhibited including showings at the V & A and The Hayward.

‘Melodramatic’ will be available April 21st 2022