Cardi B has announced that she will be releasing her long-awaited single off her sophomore album very soon. During her Instagram Live on Friday, Cardi told fans to expect the lead track soon.

“My single’s coming when I lose weight…never!” she joked before adding, “No, it’s coming real soon, I swear. Y’all gon’ love it.” 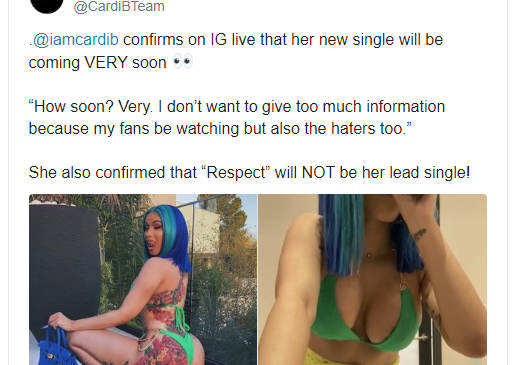 When fans asked how soon, she responded, “Very. I don’t want to give too much information because my fans be watching but also the haters too.”

The song has been a long time coming and was reportedly delayed due to a protracted renegotiation with her label Atlantic Records, but it appears that she has reached a resolution.

Cardi has not released any solo music since “Press” in May 2019, but she has teased the long-awaited follow-up to her 2018 debut Invasion of Privacy.